It has been 10 years since ketamine abuse was found to be associated with lower urinary tract symptoms (LUTS), such as urinary frequency, incontinence and voiding difficulties.  The latest study by The Chinese University of Hong Kong (CUHK), the world’s first large scale survey of its kind, has revealed that in addition to ketamine, abuse of methamphetamine (commonly known as ‘ice’) can also cause the symptoms and brings adverse effect to urinary bladder function. 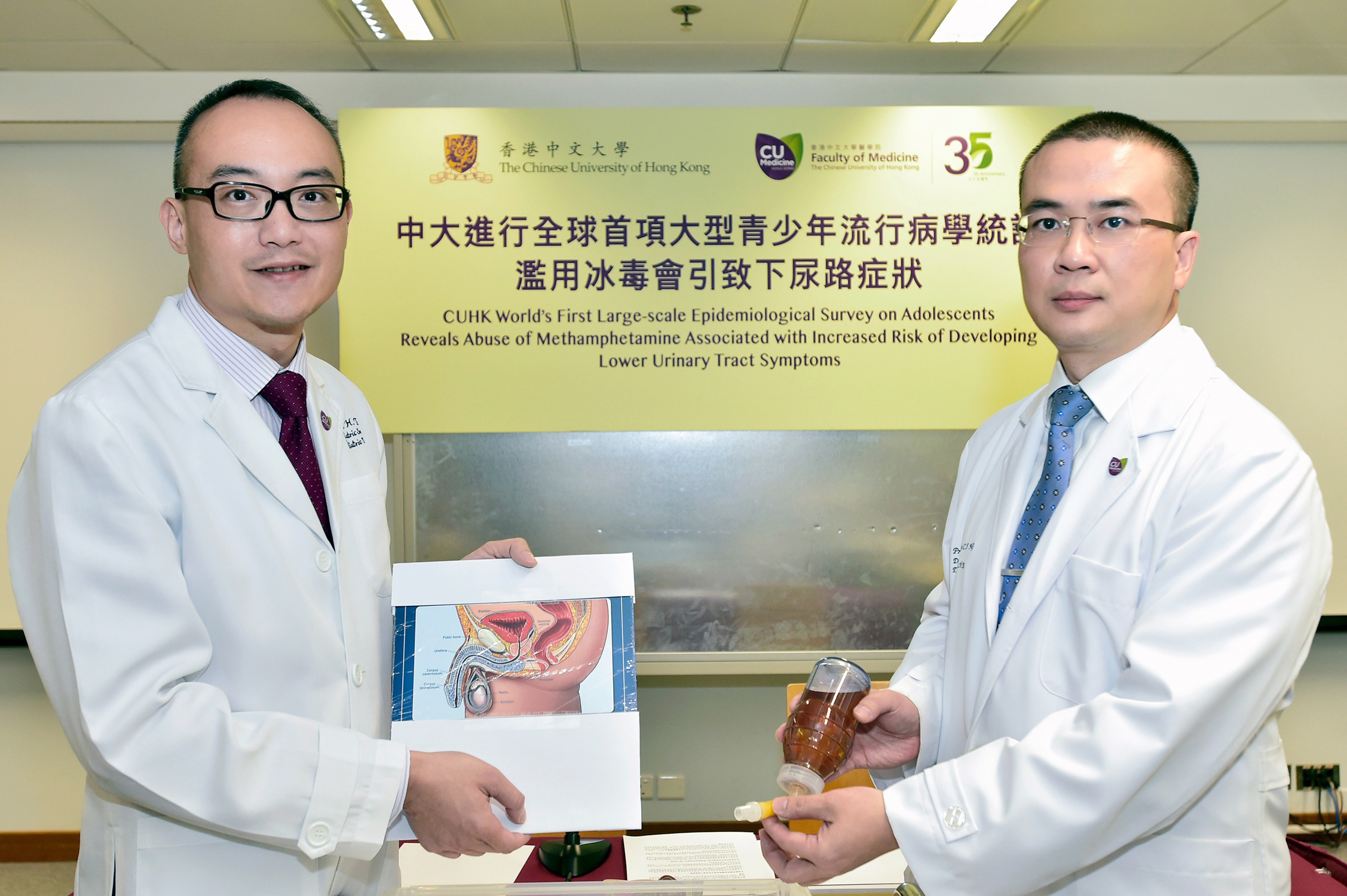 Half of psychotropic substance abusers have experienced LUTS

The Department of Surgery of the Faculty of Medicine at CUHK conducted the world’s first large-scale questionnaire survey on adolescents to investigate the prevalence of LUTS and the effect of psychotropic substance abuse. The study was conducted between 2012 and 2014 on 11,938 secondary students from 45 schools (7 in Hong Kong Island, 13 in Kowloon and 25 in the New Territories).

In the study, participants who were non-substance abusers were regarded as control subjects and among them 18.5% had experienced at least one LUTS.  For the 321 (2.7%) participants who had ever abused psychotropic substance, the portion was close to half (47.8%).

Further analysis by breaking down the substance abusers into subgroups revealed that those who abused both ketamine and ‘ice’ had the highest risk and 70% of such abusers had experienced LUTS.

According to the statistics released by the Narcotics Division of the HKSAR Government in the first half of 2016, methamphetamine (1,423) surpassed ketamine (847) as the most common type of psychotropic substance abused. Therefore, research on health hazards of ‘ice’ to enhance public awareness should be conducted without delay.

Dr. Yuk Him TAM, the principal investigator of the study and Co-Director of Youth Urological Treatment Centre (YUTC) of the Faculty of Medicine at CUHK, said, ‘Our study has demonstrated clearly that methamphetamine abuse is associated with the increased risk of developing LUTS, and abusing both ketamine and methamphetamine at the same time appears to be the worst. While our society should be quite aware of the deleterious effects of ketamine abuse on urinary tract by now, the public should be alerted to this largely unheard-of but important finding about methamphetamine. The myth that methamphetamine is a “safer” substance than ketamine for the urinary tract should be completely dispelled.’

He added that YUTC has started treating patients suffering from methamphetamine-associated urinary tract dysfunction over the past year. 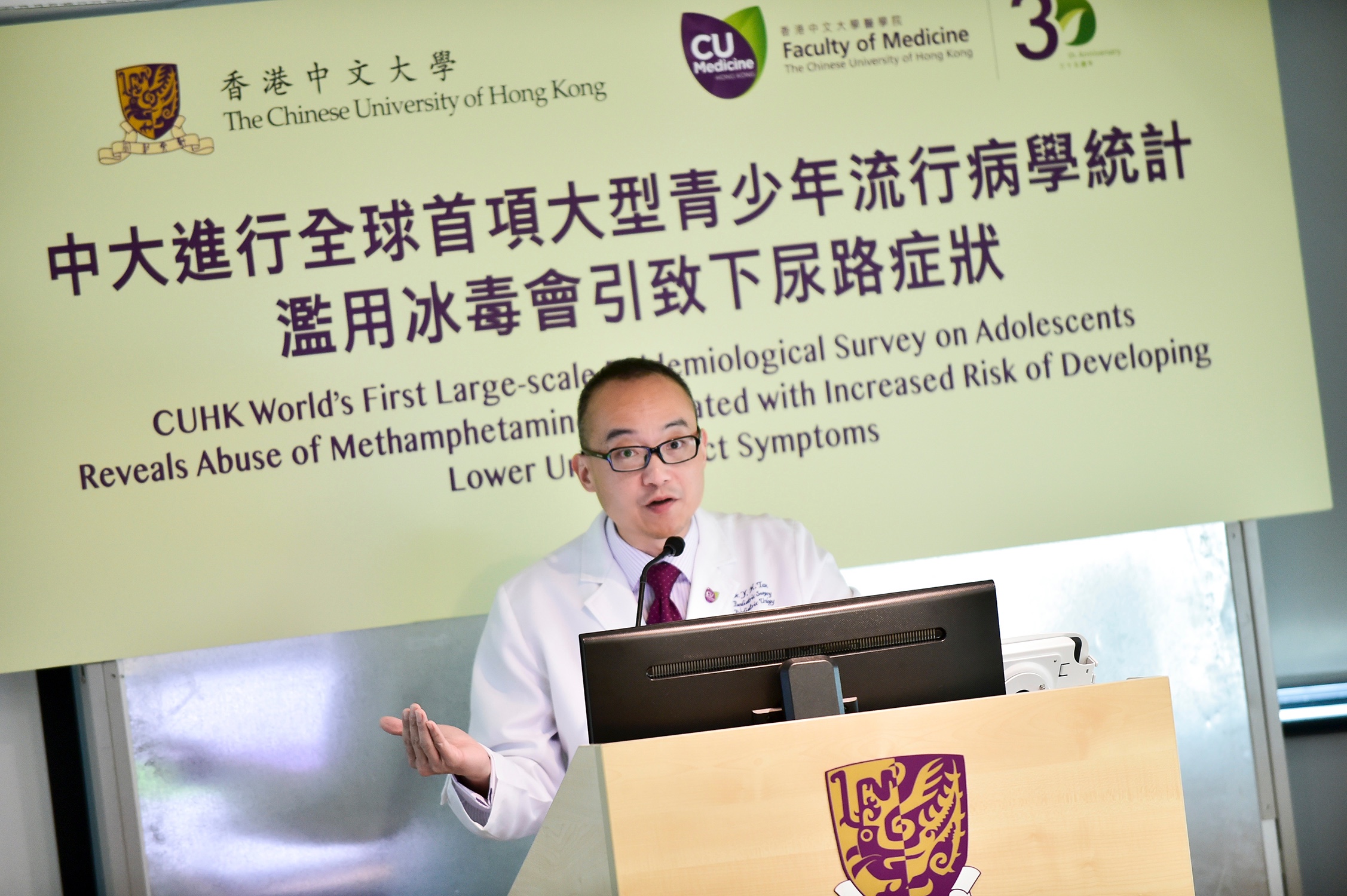 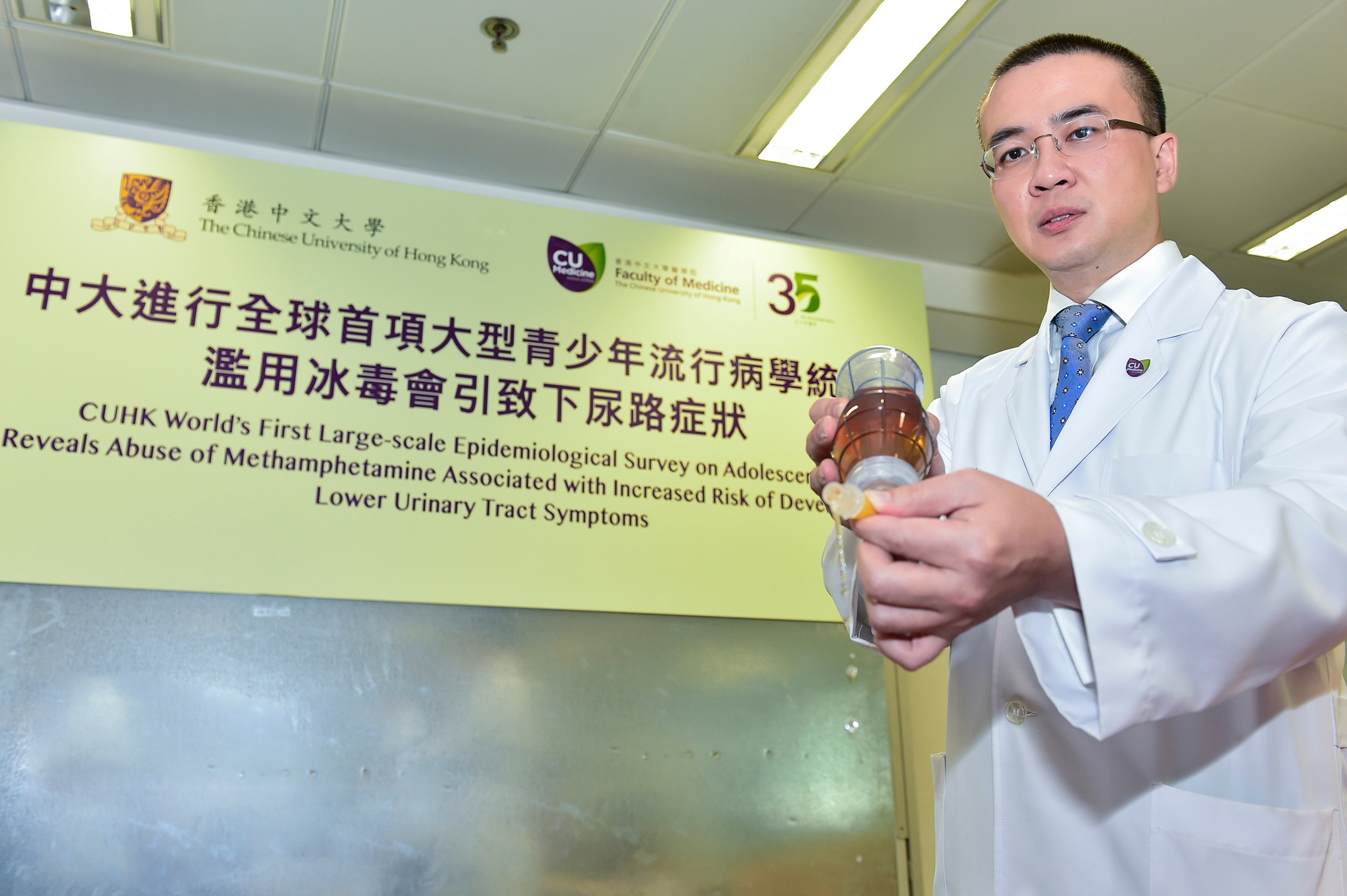 Prof. Chi Fai NG, Co-Director of YUTC and Professor, Division of Urology, Department of Surgery of the Faculty of Medicine at CUHK, pointed out that ‘ice’ may affect the urinary tract function by its effects on the nervous system controlling the urinary bladder sphincter mechanism.

‘Serious consequences could develop if the condition lingers on and is left untreated. Patients may delay seeking urological treatment as pain is not the predominant symptom unlike in ketamine-associated urinary tract dysfunction. Katemine abusers may suffer from urinary bladder pain or painful urination,’ he explained.

Prof. NG emphasised that at this moment very little is known from the existing medical literature about the treatment and the long-term prognosis of the methamphetamine-associated urinary tract dysfunction, and to quit drugs as early as possible is the best way to reduce irreversible injury to the urinary tract.

In 2011, CUHK established YUTC at the Prince of Wales Hospital after receiving the funding from the Beat Drugs Fund of the HKSAR Government.  The Hospital Authority works in collaboration with the Faculty in the operation of the Clinic which has the mission to provide dedicated urological care to young patients suffering from urological problems associated with psychotropic substance abuse through assessment and treatment services. To date, it has treated over 600 patients who suffer from ketamine- or methamphetamine-associated urinary tract dysfunction.  And the captioned epidemiological survey research on adolescents was funded by the Beat Drugs Fund.    The team will continue to work in close partnership with other anti-drug social work services to promote a drug-free environment in society.  For more details about YUTC, public could call hotline 3505 3773 or visit website http://www.surgery.cuhk.edu.hk/yutc/. 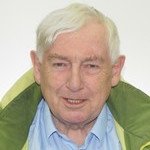 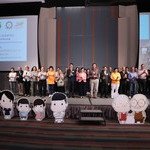