A transregional research led by Prof. Yu HUANG of the School of Biomedical Sciences, Faculty of Medicine, The Chinese University of Hong Kong (CUHK), working in collaboration with Tianjin Medical University in mainland China and The Institute of Cellular and System Medicine in Taiwan, has revealed that YAP/TAZ, a transcriptional regulator in vascular endothelial cells, has close links to vascular inflammation and the formation of atherosclerosis. ‘Atherosclerosis’ is a disease in which plaque builds up inside the arteries. The plaque is made up of lipids (mainly cholesterol), calcium deposits and immune cells such as macrophages and mast cells. It hardens and narrows the arteries over time and is one of the major causes of stroke and heart diseases. Based on the studies made on experimentally-induced atherosclerotic mice, the research team has elucidated new therapeutic targets against atherosclerosis. These findings have just been published in an international scientific journal Nature.

YAP/TAZ is also considered as a ‘cancer gene’ since its activation promotes the development of cancer. Professor Huang and his research team have found that several existing lipid-lowering and anti-atherosclerotic drugs inhibit YAP/TAZ transcriptional activation. The finding holds the promise of opening up new treatment directions to combat against not only cardiovascular diseases but also against cancer development. 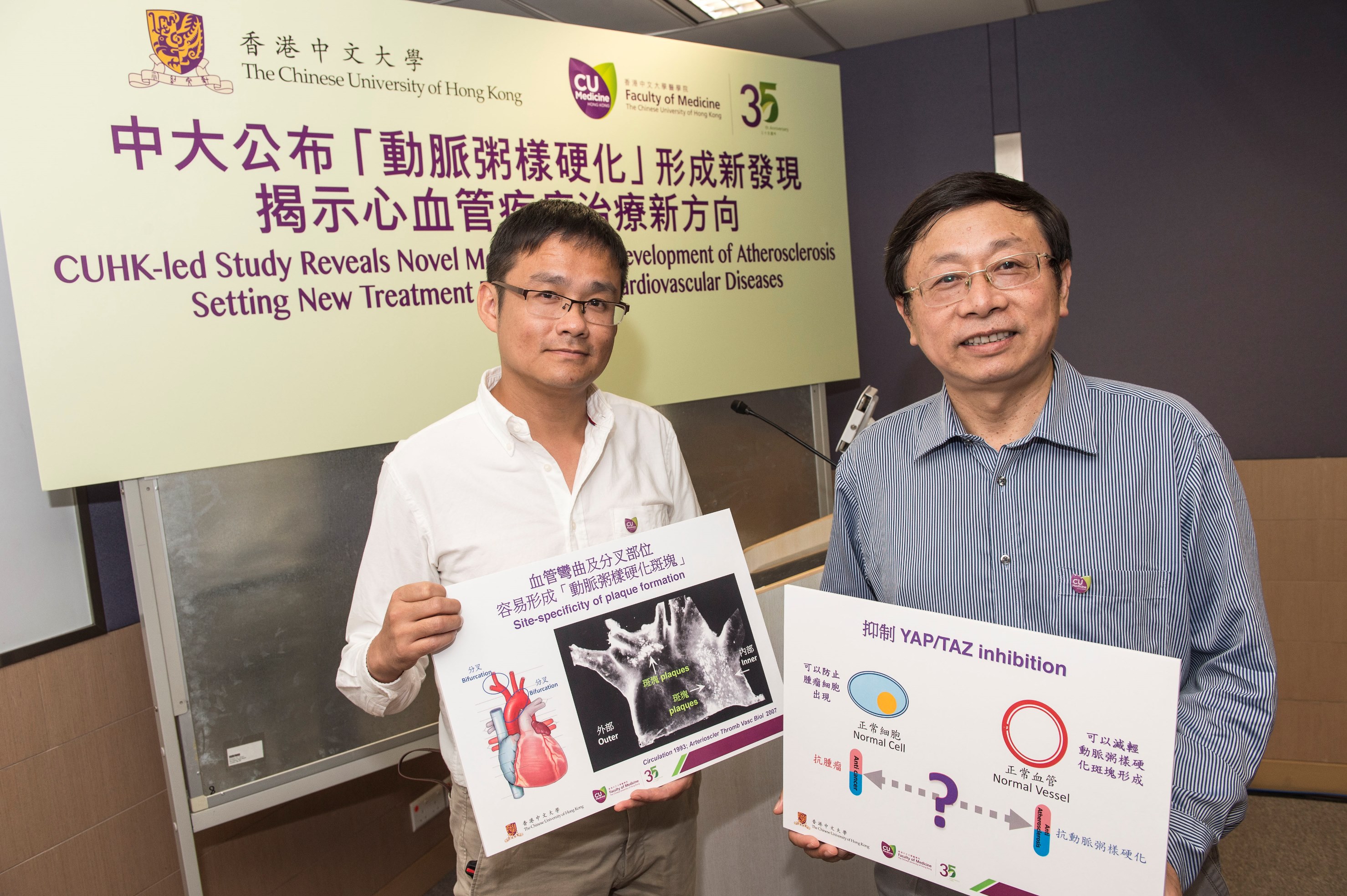 A transregional study led by the Faculty of Medicine at CUHK reveals novel mechanism for the development of atherosclerosis, setting new treatment directions to cardiovascular diseases. (Right) Prof. Yu HUANG, Professor of the School of Biomedical Sciences and Director of the Institute of Vascular Medicine & Dr. Li WANG, postdoctoral researcher of the School of Biomedical Sciences, Faculty of Medicine, CUHK.

YAP/TAZ as a ‘cancer gene’

YAP/TAZ is also expressed in ‘vascular endothelial cells’ that form the inner lining of blood vessels.  It functions as a downstream effector of the Hippo signaling pathway, which controls organ size and suppresses tumor growth by modulating cell proliferation, cell death and cell differentiation.  Activation of the Hippo pathway leads to the inhibition of YAP/TAZ activity, while the derangement of this signaling pathway has the opposite effect, resulting in uncontrolled cell proliferation and increased incidence of cancer.  Therefore, YAP/TAZ can also be regarded as a ‘cancer gene’.

Blood flow generates pressure, tension, bending force, torque, shear and so on.  The present study also reveals that YAP/TAZ is regulated by the different patterns of blood flow. Blood flow in the blood vessels is divided into laminar and turbulent flow. Generally in the human body, blood flow is laminar.  Turbulent blood flow is formed in the perturbation region at the vascular branch and in trauma and surgery (e.g. stents).  The study demonstrates that shear stress generated by laminar flow reduces the YAP/TAZ activity, and the inhibition of YAP/TAZ effectively restrains the pro-inflammatory JNK signaling and downregulates pro-inflammatory gene expression, thereby reducing monocyte adhesion to endothelial cells, which represents a key step in the initiation of atherogenesis.  By contrast, turbulent blood flow increases the activity of YAP/TAZ and results in vascular inflammation.

Dr. Li WANG, postdoctoral researcher of the School of Biomedical Sciences, Faculty of Medicine at CUHK said, ‘We believe these novel findings will help us to develop new anti-atherosclerotic therapeutic targets.’

‘This observation might also provide a new theoretical explanation of why physical activity can prevent arteriosclerosis.  Our ongoing research in exercise-mediated health may one day lead to the development of vascular protective YAP/TAZ inhibiting drugs,’ he added.

Prof. Yu HUANG, Professor of the School of Biomedical Sciences and Director of the Institute of Vascular Medicine, Faculty of Medicine, CUHK said, ‘Our study reveals that YAP/TAZ activation exerts pro-inflammatory effects in vascular endothelial cells, and YAP/TAZ activity can be inhibited by lipid-lowering drugs, especially statins. Our findings have important implications for repurposing the existing drugs and opening the possibility of identifying drugs against cardiovascular diseases, which may also have the added potential of being effective against cancer development or, in contrast, for certain anti-cancer drugs which could be also useful for the amelioration of cardiovascular complications.

Prof. Yu HUANG initiated and led this study. Professor HUANG’s team mainly focuses on vascular endothelial cell signaling, the pathogenesis of cardio-metabolic diseases and the elucidation of new pharmacological effects of drugs used in the treatment of cardiovascular complications.  His research team has in recent years published a series of important studies in Cell Metabolism, Circulation Research, European Heart Journal, Diabetes and many other high impact research journals in the fields of cardio-metabolic biology and medicine. His research greatly advances people’s understanding of the pathophysiological process of endothelial dysfunction in hypertension, obesity and diabetes. Professor Huang received the Croucher Senior Research Fellow Award in 2014 and the State Natural Science Award (2nd class) in 2015.

Back to Listing page
PREVIOUS
The 9th Palliative Care Symposium for Health Care Workers in Chinese Population: ‘Integrating Palliative Care into General Care: Paving the Way for the Future’ 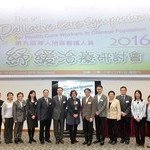 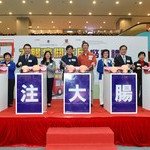