The gastroenterology team of the Faculty of Medicine at The Chinese University of Hong Kong (CUHK) has been carrying out a research on the effectiveness of using Fecal Microbiota Transplantation (FMT) to treat patients with severe Clostridium difficile (C. difficile) infection beginning this year. The result reveals a cure rate of over 85% when using FMT, which is significantly higher than that of conventional antibiotic treatment. The team will continue to collect further clinical data to test the applicability of FMT in other digestive diseases such as irritable bowel syndrome and ulcerative colitis, with an aim to provide patients with a better therapy.

【The conventional treatment and severity of C. difficile infection】

The presenting symptoms of C. difficile infection include fever, abdominal pain and diarrhea. The current first-line treatment is antibiotic to provide resistance against the pathogenic bacteria, but the drug can also suppress the healthy ones which may lead to persistence of the microbial dysbiosis. As a result, the recurrent rate of C. difficile infection remains high.

Dr Sunny Hei WONG, Assistant Professor, Department of Medicine and Therapeutics at CUHK, stated, ‘According to previous experience, about 20% of the patients had refractory disease and more than 10% would relapse after conventional treatment. Patients with severe C. difficile infection may present with dehydration, toxic megacolon, severe sepsis and even death. The 60-day mortality of severe C. difficile infection was about 25%.’

The CUHK Gastroenterology team has been the pioneer in introducing FMT for recurrent C. difficile infection in Hong Kong since 2013. The procedure involves collection of about 50-100g of stool from a healthy donor, followed by dilution with sterile saline and filtration. The supernatant is then infused to patients through different approaches involving nasoduodenal tube, esophagogastroduodenoscope or colonoscope.

Dr Kelvin Long Yan LAM, Clinical Assistant Professor (honorary), Department of Medicine and Therapeutics at CUHK, further explained, ‘The restriction on donors’ health conditions in FMT is far more than that for blood donors. We have to initially screen out potential donors with transmissible diseases. Then, stool and blood are also collected to screen out those with other illnesses such as metabolic syndromes and parasites.’

Since early this year, CUHK has been carrying out a research study to compare FMT with the conventional antibiotics treatment for severe C. difficile infection. Fifteen cases have been followed with the preliminary results shown as below:

It is notable that FMT is significantly more effective, with a cure rate triples that of the conventional treatment. Among those patients undergoing FMT, two reported mild abdominal discomfort which resolved within 1-2 days. In addition, one patient receiving conventional treatment had refractory disease and was thus treated with FMT after the study. The patient was cured afterwards.

Dr Siew Chien NG, Associate Professor, Department of Medicine and Therapeutics at CUHK, concluded, ‘The aim of FMT is to introduce healthy microbiota to restore the microbial ecology in the digestive tract. FMT has therapeutic potentials in other diseases including inflammatory bowel disease, irritable bowel syndrome, metabolic diseases and autoimmune diseases. In this regard, we are currently conducting another research projects to investigate the therapeutic potentials of FMT in irritable bowel syndrome, with an aim to test the applicability of FMT in other digestive diseases in hope for a better therapy.’

To collect more clinical data for further study, healthy donors for stool are recruited. Interested people can email their contact details to digestivehealth@cuhk.edu.hk.. 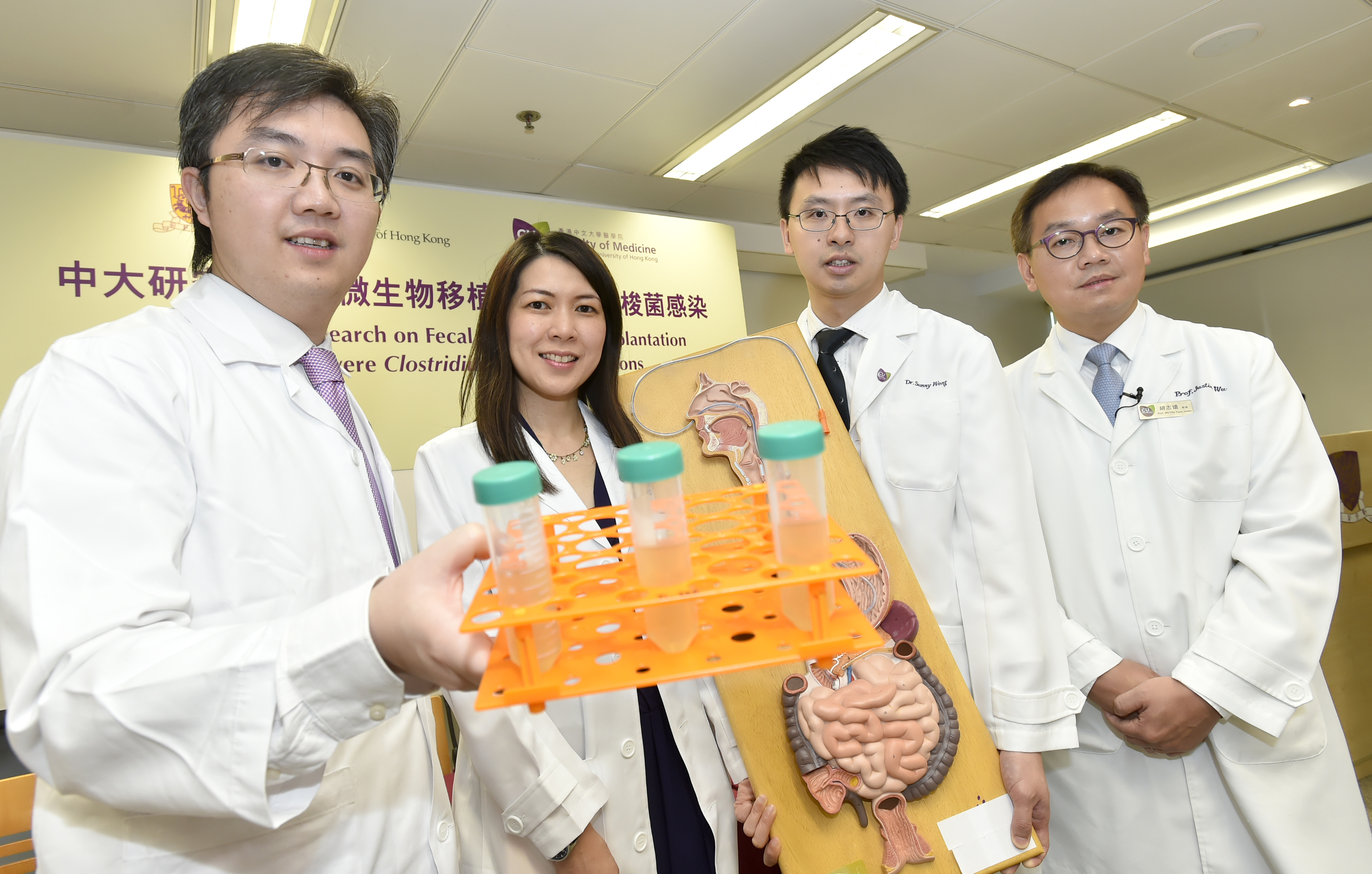 (From right) Prof. Justin Che Yuen WU, Dr. Sunny Hei WONG, Dr. Siew Chien NG, and Dr. Kelvin Long Yan LAM of the Department of Medicine and Therapeutics at CUHK reveal that the cure rate of FMT triples that of the conventional antibiotic treatment. On Dr. Lam’s hand is the supernatant sample after dilution and filtration. 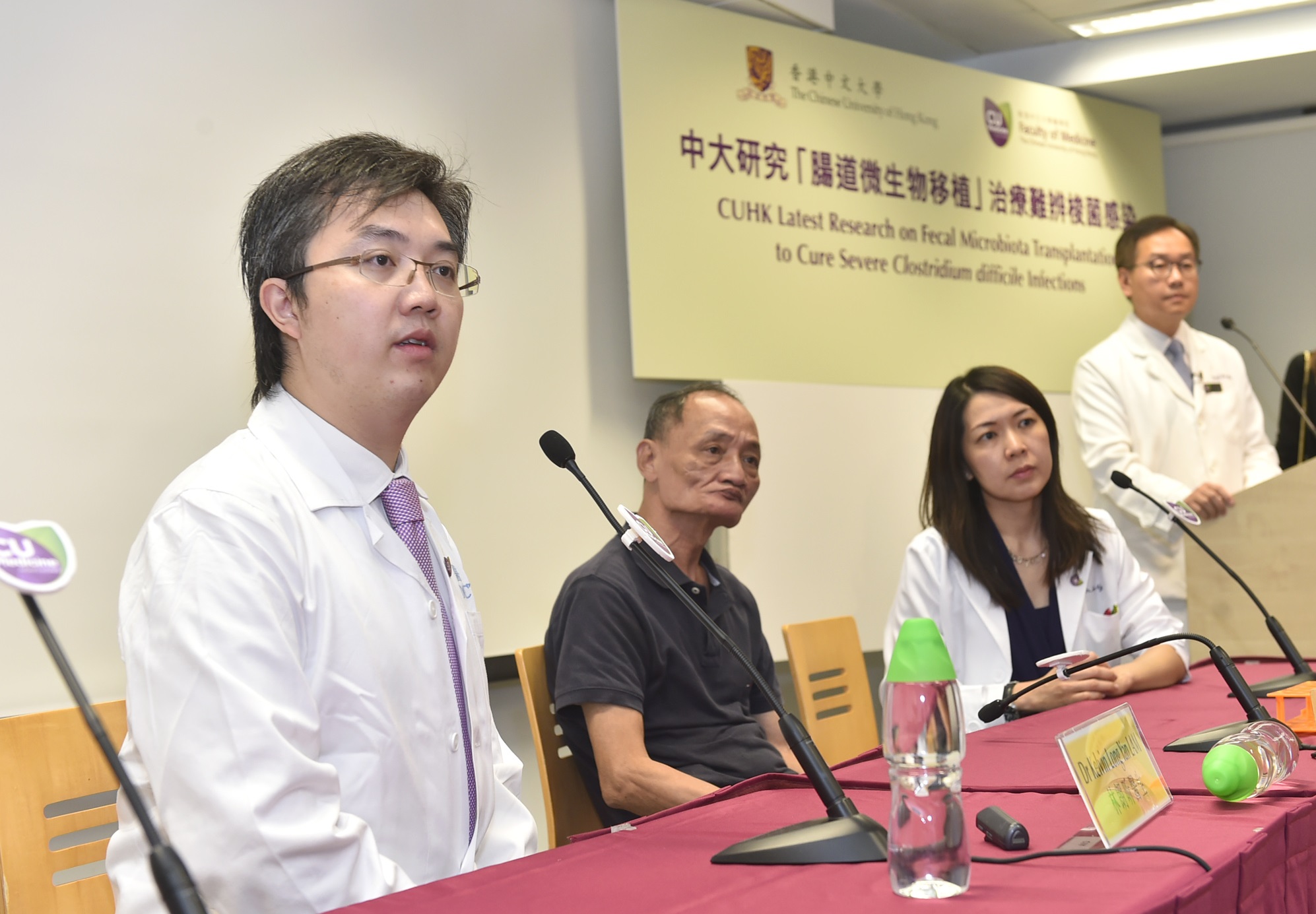 Mr Cheng (2nd left) kept suffering from diarrhea after 3 courses of antibiotic treatment. After FMT treatment, his symptoms have been relieved and there is no recurrence till now. 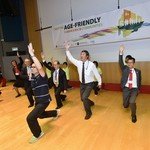 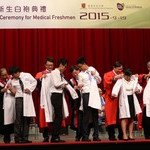