The latest study conducted by the Faculty of Medicine of The Chinese University of Hong Kong (CUHK) revealed that 4.4 billion people worldwide are infected with Helicobacter pylori (H pylori), which could lead to peptic ulcer disease and even gastric cancer. Its prevalence in Africa is up to 80% which is the highest worldwide, while in Asia, more than half of the population are infected with H pylori. This is the world’s first study to analyze the global prevalence of H pylori. The results have just been published in the top medical journal Gastroenterology.

H pylori is a bacterium found in the stomach and duodenum. It is the only bacterium known to thrive in the human stomach and stimulate the secretion of gastric acid. The mucous coating of the gut can be damaged, leading to gastric and duodenal ulcers. According to the International Agency for Research on Cancer, H pylori has been identified as a Group I carcinogen as it could cause gastric cancer.

Most individuals infected with H pylori have few or no symptoms. They may experience minor belching, bloating, nausea, vomiting and abdominal discomfort when the condition progresses to gastritis. Once H pylori is detected in a person, a course of eradication treatment consisting of proton pump inhibitors and antibiotics will be prescribed.

However, there are escalating concerns due to the mounting antibiotic resistance of H pylori. In addition, the number of gastric ulcer cases related to long-term usage of painkiller drugs has increased in recent years. If these patients are also infected with H pylori, their risk of developing stomach ulcer-related bleeding will be greatly increased.

The research team formed by gastroenterologists including Prof. Joseph SUNG, Vice-Chancellor and President of CUHK; Prof. Francis CHAN, Dean of the Faculty of Medicine; and Prof. Siew Chien NG, Professor of the Department of Medicine and Therapeutics, and 3 medical undergraduates conducted a large-scale systematic review to report the latest prevalence of H pylori in the world. The students from the team looked into a total of 14,000 studies on H pylori prevalence infection in the general population published from 1970 to 2016. Around 200 papers were then gone through into details after full-text review.

The data were grouped by geographic region based on the United Nations geoscheme. The study results are tabulated as follows:

The co-first author of the study, Ms. Lily Wan Ying LAI, a CUHK Medicine Year 5 student, explained, ‘By extrapolating our results to the total population living in the respective countries and regions in 2015, this global systematic review shows that approximately 4.4 billion individuals worldwide are positive with H pylori. We also confirmed a wide variation in the prevalence of H pylori between regions and countries. The differences are likely due to varied socioeconomic status and the level of hygiene, such as the chance of accessing clean water.’

The prevalence of H pylori in 62 countries and regions was reported in this study. The 3 countries with the highest H pylori burden were Nigeria, Portugal and Estonia. Hong Kong as well as the nearby countries and regions such as mainland China, Japan, Korea and Taiwan, also had over half of the population infected with H pylori.

Prof. Siew Chien NG, Professor, Department of Medicine and Therapeutics, Faculty of Medicine at CUHK, from the research team, concluded, ‘This paper highlights that there is a significant burden from H pylori globally, with a large number of people affected in Asia. However, there is no cause for alarm because not everyone will develop severe complications from this infection. Members of the public with persistent symptoms like “gastric pain” should consult their physician for a review.’

Being listed as co-first authors in an internationally leading journal, Mr. James Kwong Yew HOOI, also a CUHK Medicine Year 5 student from the research team, remarked, ‘Writing this paper gave us students new insights and perspectives to approach medicine. Being met with such a huge task of reviewing over 14,000 papers, extracting the information whilst simultaneously interpreting it at a high level was a great but rewarding hurdle. We are so grateful to have been able to contribute to the scientific community through the supportive network of doctors, researchers and professors of CUHK.’ 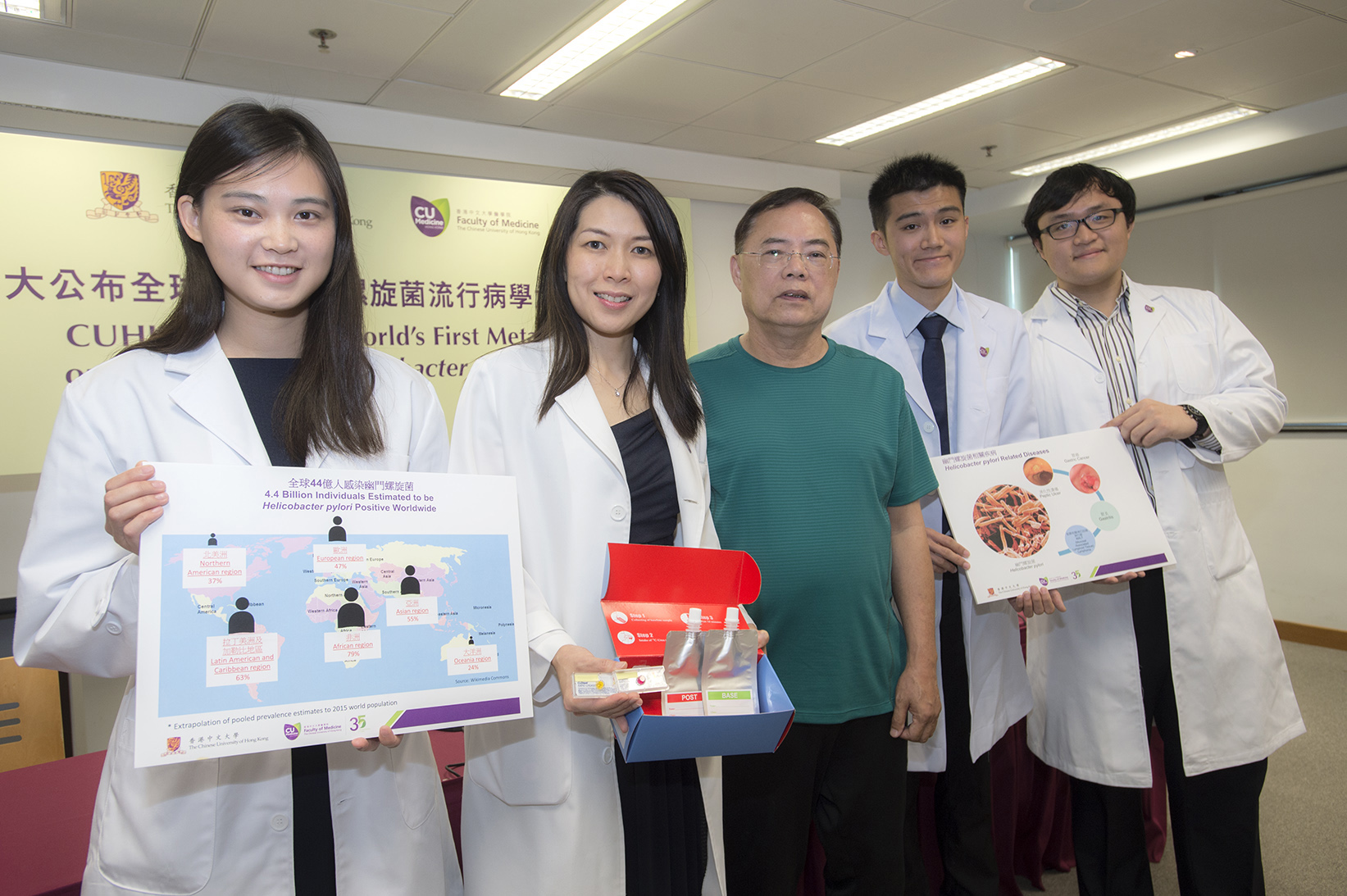 A research team formed by gastroenterologists including Prof. Siew NG (2nd from left) from the Department of Medicine and Therapeutics, Faculty of Medicine at CUHK and CUHK Medicine Year 5 students including Ms Lily LAI (1st from left), Mr Michael SUEN (2nd from right) and Mr James HOOI (1st from right), found that 4.4 billion people worldwide are infected with Helicobacter pylori. Mr LO (middle) shares his experience of Helicobacter pylori infection at the press conference. 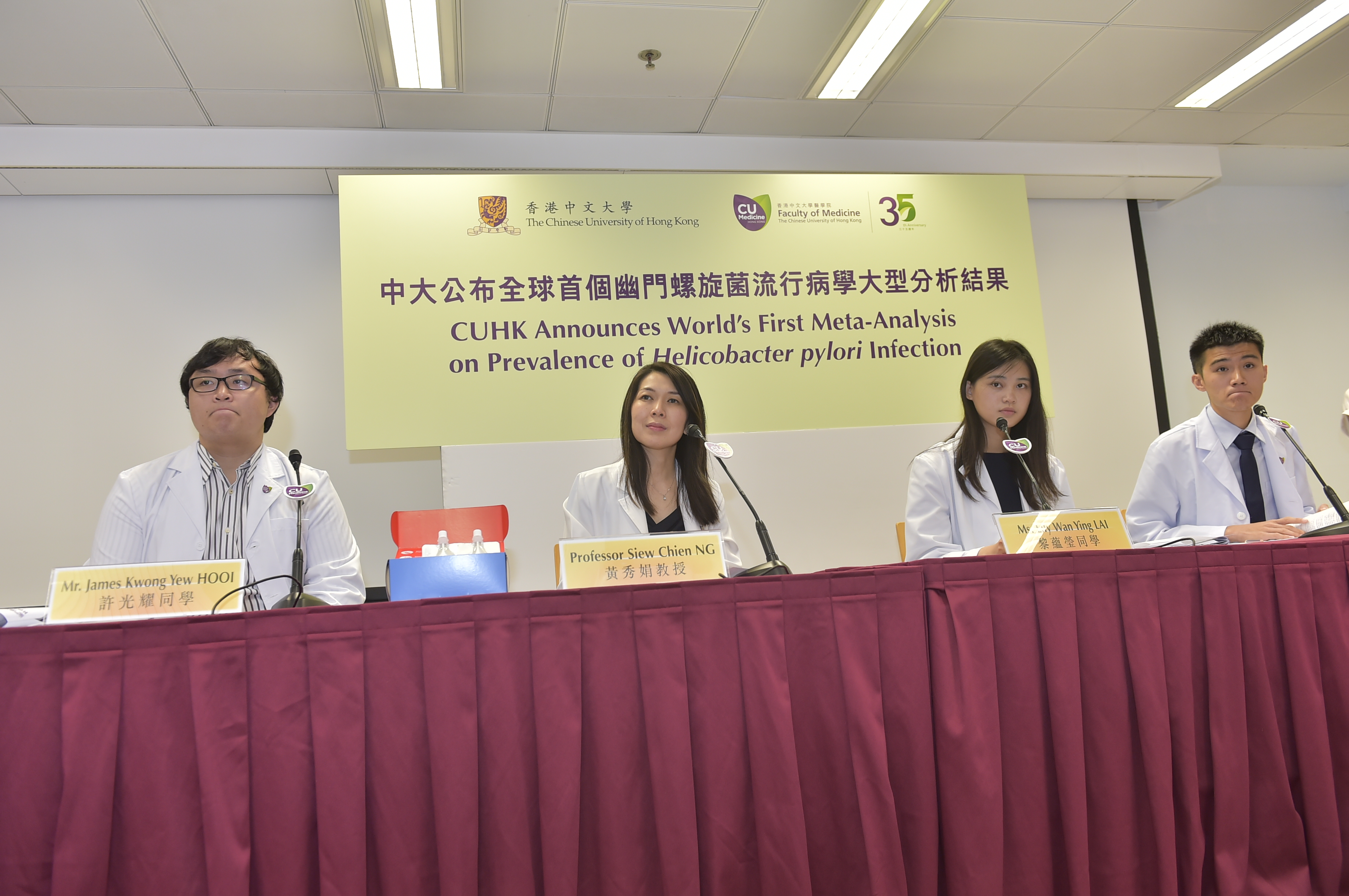 A research conducted by gastroenterologists and medical undergraduates from the Faculty of Medicine at CUHK highlights that there is a significant burden from Helicobacter pylori globally, with a large number of people affected in Asia. (From left) CUHK Medicine Year 5 student Mr James HOOI, Prof. Siew NG from the Department of Medicine and Therapeutics, CUHK Medicine Year 5 student Ms Lily LAI and Mr Michael SUEN. 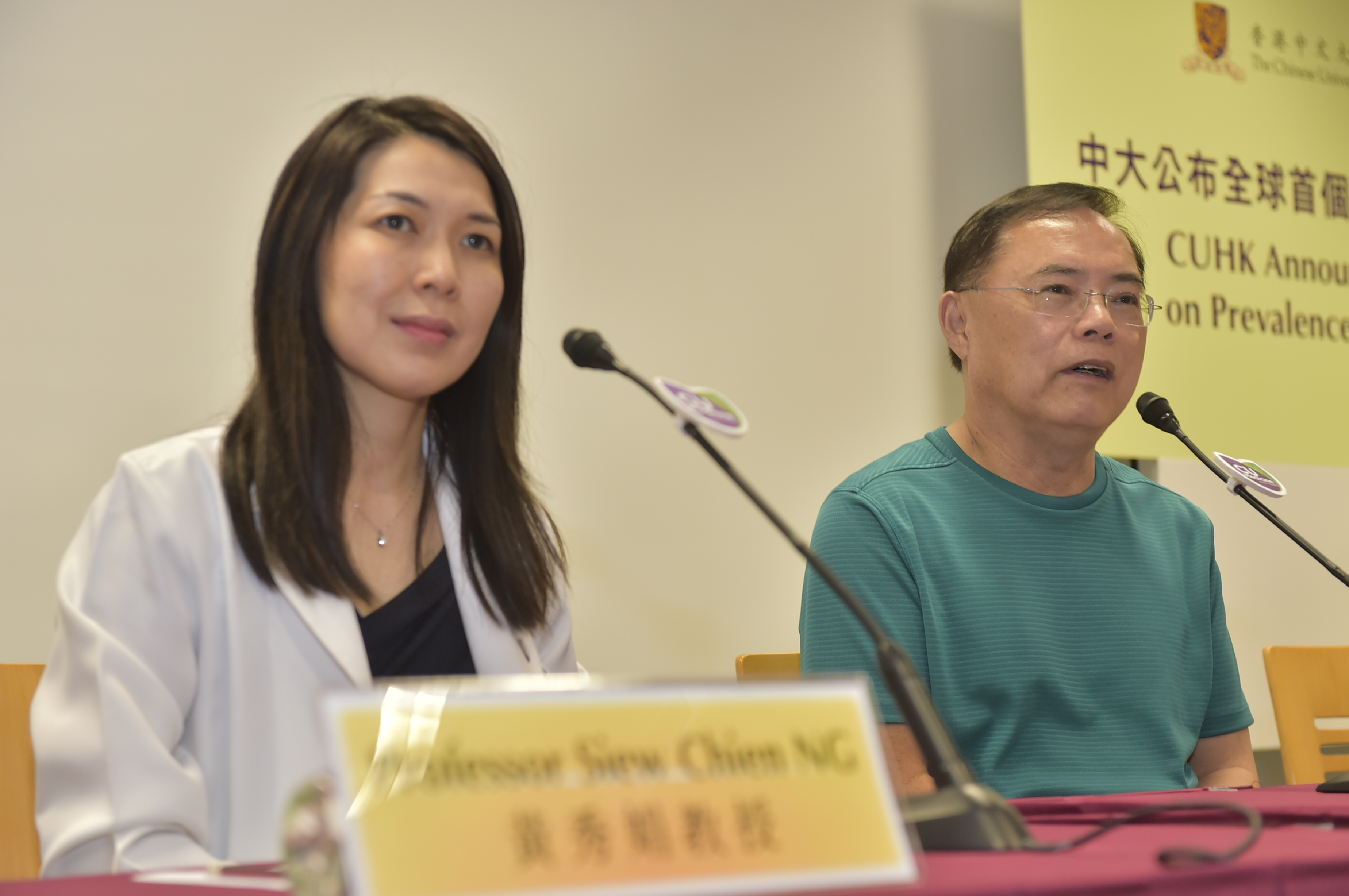 Mr LO (right) shares that his Helicobacter pylori infection has been eradicated after receiving antibiotics treatment. 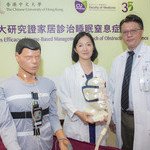 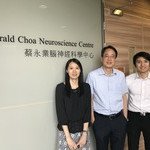