The Chinese University of Hong Kong (CUHK) is collaborating with research centres in Australia and mainland China on a research project entitled ‘The ENIGMA Studies - Eastern Inflammatory Bowel Disease (IBD) Gut Microbiota’ (ENIGMA).  The aim of ENIGMA is to study the association between IBD, especially Crohn's disease, and the patients’ gut microbiota and dietary habits.  The research team aims to identify the cause of Crohn’s disease through cross-boundary collaboration so to prevent and to effectively treat the disease.  CUHK has received a USD 1.8 million grant from The Leona M. & Harry B. Helmsley Charitable Trust in New York (equivalent to approximately HKD 14 million) for this research project. It is one of the largest grants received by the University in recent years.

IBD is a non-infectious chronic inflammatory disease of the intestine.  Crohn’s disease is a major sub-type of IBD, with lifelong symptoms that could affect any part of the digestive tract from the mouth to the anus.  The digestive tract can be affected by inflammation, ulcerations or even bleeding.  Frequent intestinal inflammation will lead to fibrosis, resulting in intestinal obstruction.  The presence of leakage and abscesses along the intestine can also lead to the formation of an abnormal channel called ‘fistula’ which links the intestine to the adjacent organs.  Severe cases may be associated with intestinal perforation leading to complications such as sepsis and peritonitis.  Treatment for Crohn’s diseases usually involves drug therapy, or in certain cases, surgery.

Cross-boundary collaboration to investigate the cause of Crohn’s disease

In recent years, studies have found that Crohn's disease and the patients’ living environment and eating habits are closely related.  Physicians also believe that the microbiota in a patient’s gut is one of the important factors in disease development.  Researchers from world-class scientific centers at CUHK and the University of Melbourne will lead the ENIGMA project together with the University of Queensland and key IBD partner laboratories in mainland China.  The project focuses on identifying the causes of Crohn’s disease across different countries and examining the interactions between ethnicity, geography, diet and gut microbiota.

Prof. Joseph J.Y. SUNG, Vice-Chancellor and President and Mok Hing Yiu Professor of Medicine of CUHK, also a gastroenterologist, applauded the collaboration.  He said, ‘The local incidence of Crohn’s disease has increased 7 times over the past 20 years and this figure is expected to continue to rise.  We hope that this cross-boundary and cross-institution collaboration can translate our understanding on gut microbiota into the development of better drugs.  In addition, the Gastroenterology team of the Faculty of Medicine at CUHK is also working with overseas institutions to develop new endoscopic technologies to improve the diagnosis and treatment for Crohn’s disease patients.  Let’s hope we can bring good news to them.’ Over the past eight years, a scientific platform has been established across nations with different Crohn’s disease incidences.  Australia has one of the highest incidences of Crohn’s disease worldwide.  Experts there have been trying to find a cure for the disease.

Prof. Michael KAMM, Professor of Gastroenterology from St. Vincent Hospital and the University of Melbourne, Australia, has contributed to IBD research for over 30 years.  He said, ‘There are 14 out of 100,000 people diagnosed with Crohn’s disease in Australia every year.  Through the ENIGMA project, clinical data of Australia could be shared among experts from other regions.  By combining basic science, dietetics and clinical science, we hope to identify potential causes of Crohn’s disease, develop strategies to prevent new cases, relieve symptoms for existing patients and diminish the burden of this chronic illness globally.’

In view of the rapid increase of IBD incidence (including Crohn's disease) in China, it is expected that there will be more than 1.5 million cases by 2025.  In the ENIGMA project, CUHK will serve as the coordinator of key laboratories and leading IBD clinical centres in Beijing (Beijing Military General Hospital), Guangzhou (First Affiliated Hospital, Sun Yat-sen University), Shanghai (Renji Hospital, Shanghai Jiao Tong University) and Xian (Xijing Hospital of Digestive Disease).

Prof. Siew Chien NG, Professor, Department of Medicine and Therapeutics, Faculty of Medicine at CUHK, concluded, ‘This study will combine research results on Crohn's disease in Australia established over the past years and new knowledge on the recent rise of Crohn’s disease in Hong Kong and the Mainland which will facilitate the project team to gain a more comprehensive understanding of the disease.  By applying modern techniques, the team hopes to unravel the mystery of gut microbiota as a cause in Crohn’s disease and to develop dietary and bacterial modification therapies to prevent and cure the disease.’

Members of the public can learn more about the ENIGMA project and Crohn’s disease via email to digestivehealth@cuhk.edu.hk.

CUHK has received a grant equivalent to approximately HKD 14 million from The Leona M. & Harry B. Helmsley Charitable Trust in New York to conduct this research project for 3 years. For more information on the Trust, please visit www.helmsleytrust.org. 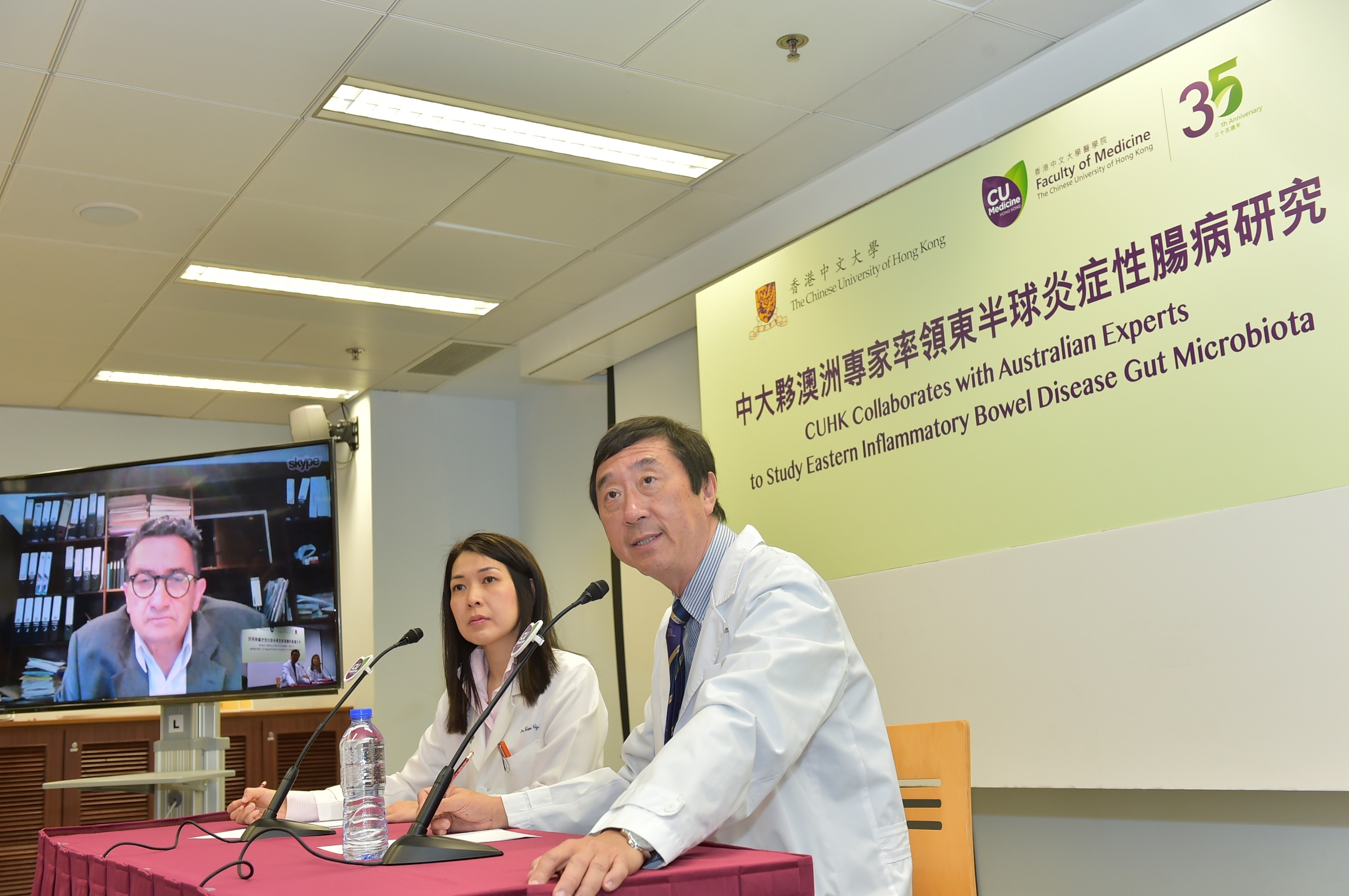 Prof. Joseph J.Y. SUNG, Vice-Chancellor and President and Mok Hing Yiu Professor of Medicine of CUHK (right) and Prof. Siew Chien NG, Department of Medicine and Therapeutics, Faculty of Medicine at CUHK (centre), discuss the incidence of Crohn’s disease in both Hong Kong and Australia with Prof. Michael KAMM, Professor of Gastroenterology from St. Vincent Hospital and the University of Melbourne, via a video call at the press conference. 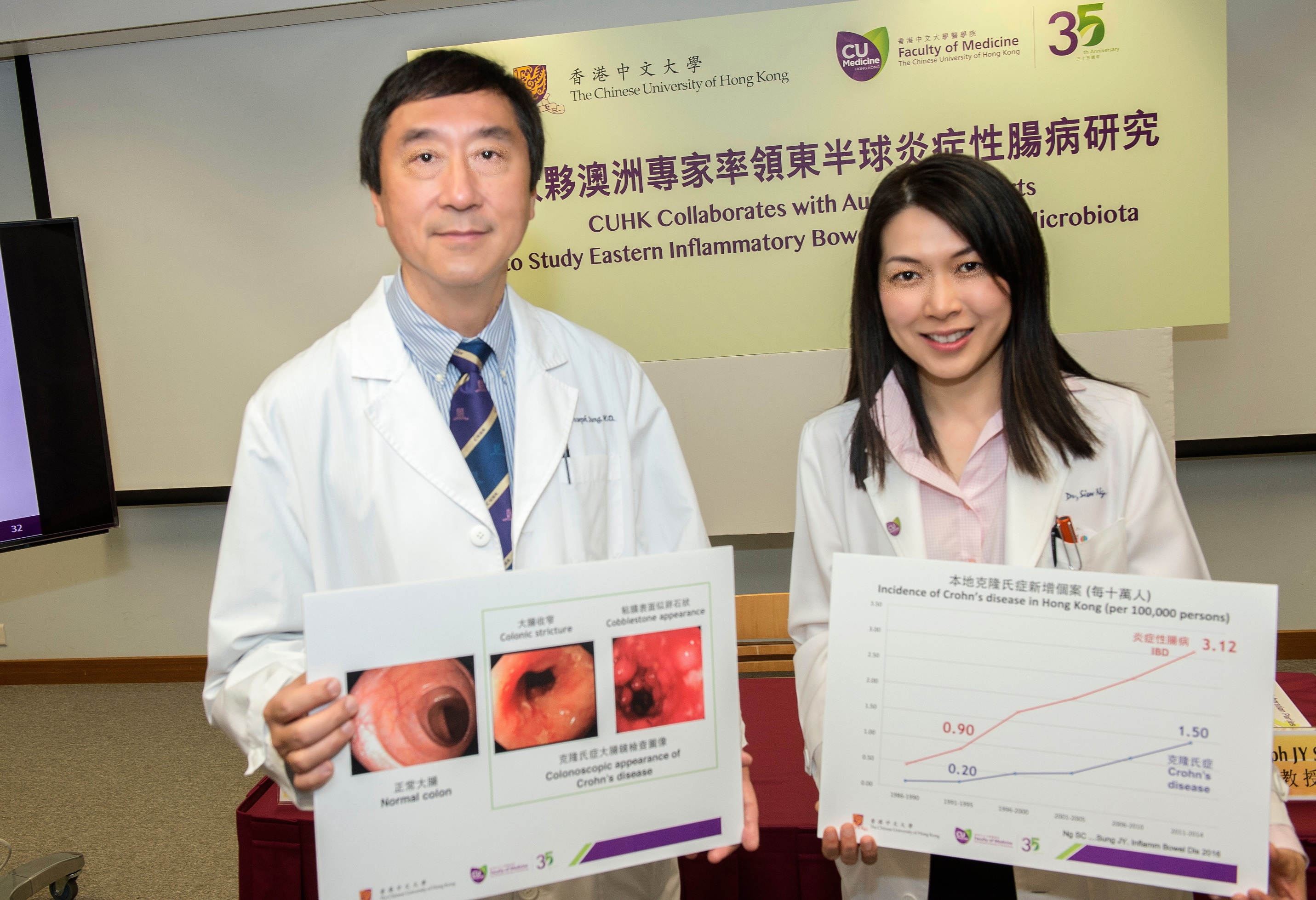 Prof. Joseph J.Y. SUNG, Vice-Chancellor and President and Mok Hing Yiu Professor of Medicine of CUHK (left) and Prof. Siew Chien NG, Department of Medicine and Therapeutics, Faculty of Medicine at CUHK, elaborate details of the ENIGMA Studies which aims to look into the association between Crohn's disease and patients’ gut microbiota and dietary habits. 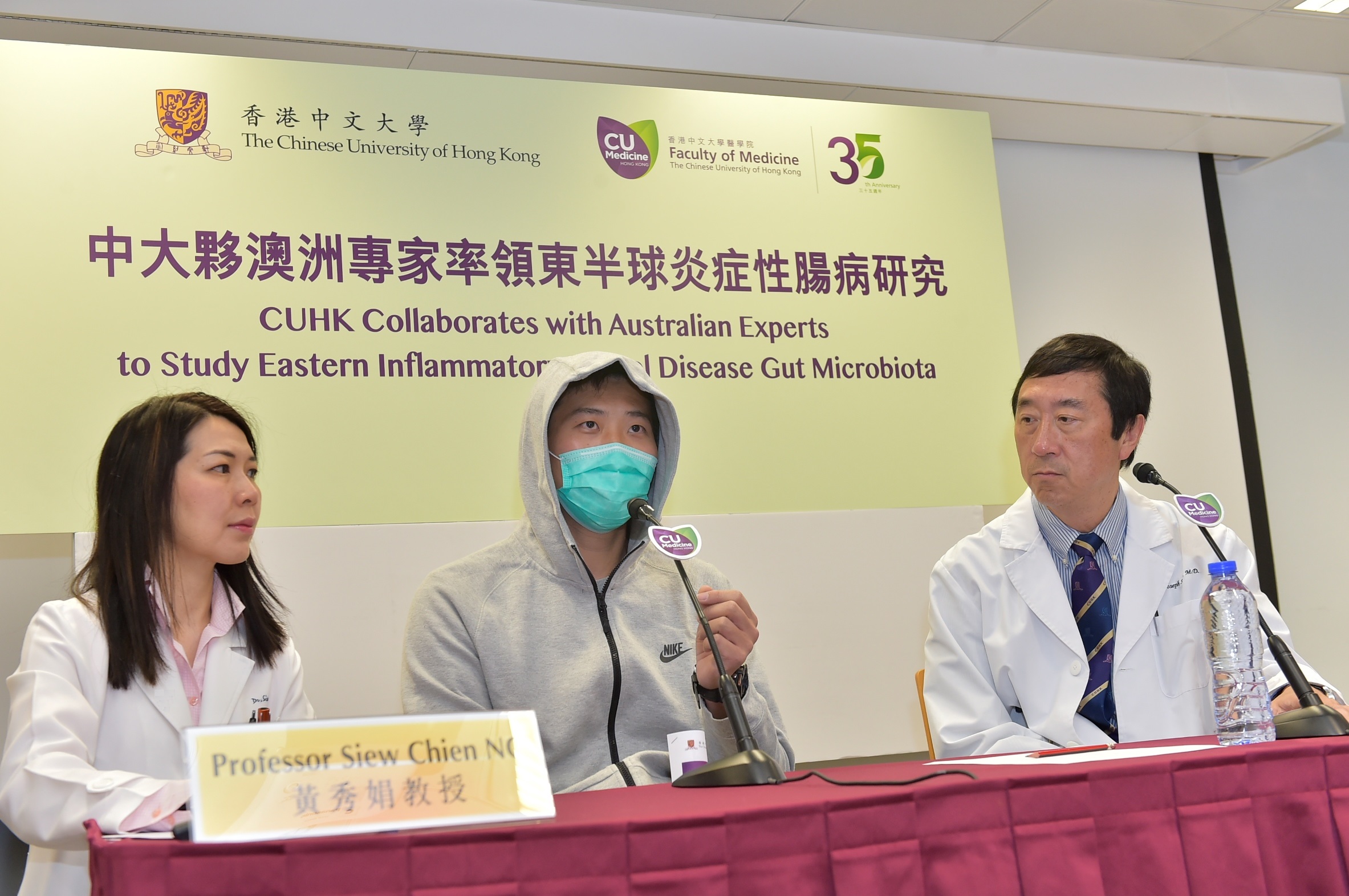 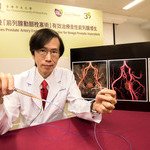 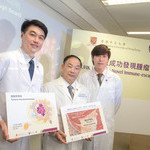