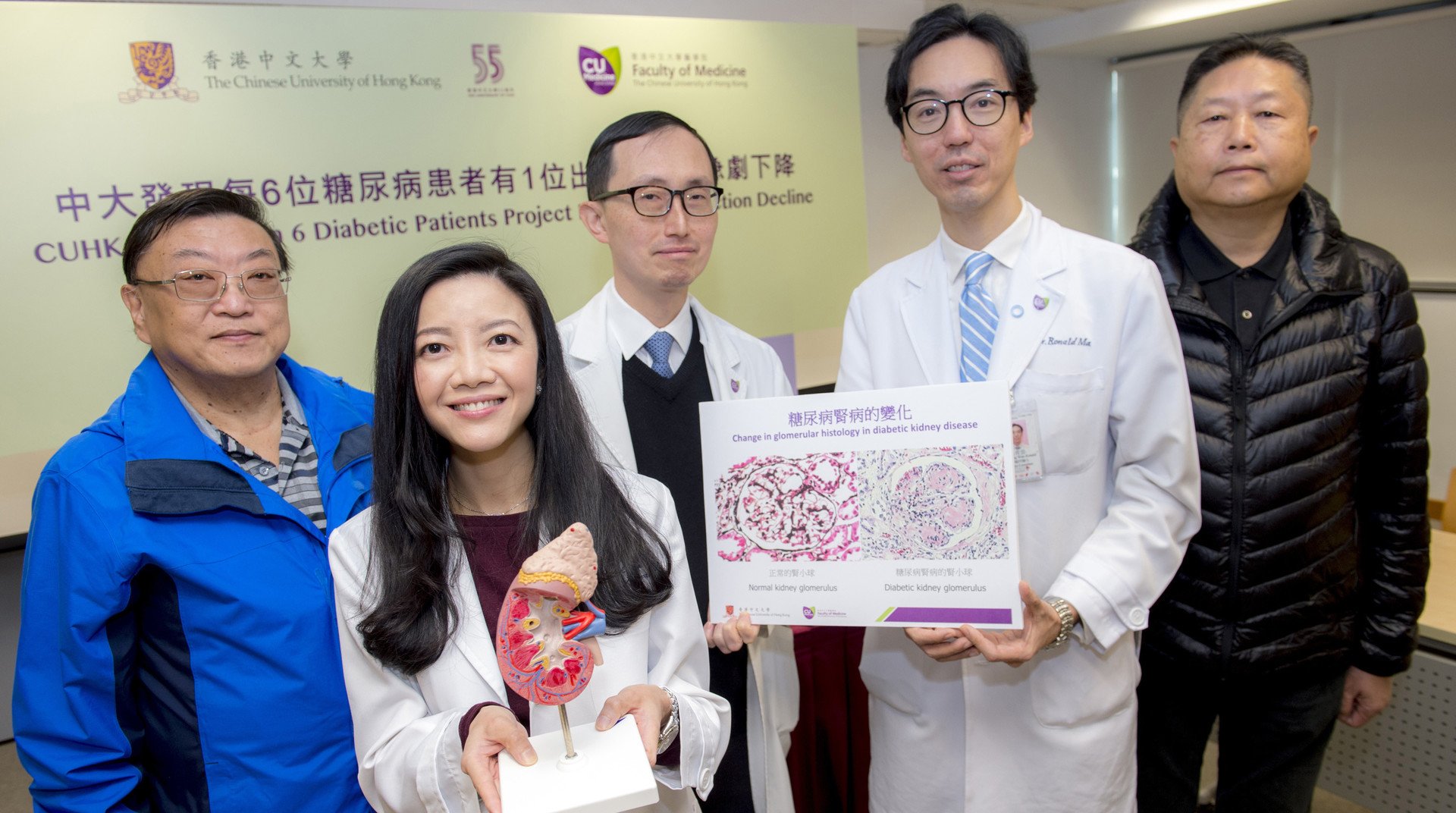 Diabetes is the most common cause of chronic kidney disease, and contributes to half of the new renal failure cases in Hong Kong every year. Most of them have suffered from diabetes for over 10 years and their renal function deteriorates faster than that of people without diabetes. A recent study conducted by the Faculty of Medicine at The Chinese University of Hong Kong (CUHK) revealed that 1 in 6 diabetes patients project a rapid deterioration of renal function. The research team followed more than 6,300 patients with type 2 diabetes over 10 years, analysed their rate of kidney function decline and identified four patterns of loss in function. The team also preliminarily identified the clinical and genetic factors that are linked to the decline. The findings have recently been published in the medical journal Kidney International.

Suboptimal management of blood glucose level for patients with diabetes will lead to chronic complications, including cardiovascular diseases (such as heart disease and stroke), diabetic retinopathy and diabetic kidney disease (DKD). The clinical manifestations of DKD are albuminuria, oedema and hypertension, while severe cases may proceed to renal failure, when only 15% - 25% of kidney function remains.

Dr. Andrea On Yan LUK, Associate Professor, Division of Endocrinology and Diabetes, Department of Medicine and Therapeutics, Faculty of Medicine at CUHK remarked, “Diabetic kidney disease is clinically silent until advanced stages. For patients who have suffered from diabetes for over 10 years, on average 2% of them will progress to end stage renal disease each year. The longer one has been suffering from diabetes, the more likely it is for the kidney function to go wrong.”

Professor Cheuk Chun SZETO, Professor, Division of Nephrology, Department of Medicine and Therapeutics, Faculty of Medicine, CUHK remarked, “Kidney function drops by about 1% per year in general for adults aged 40 or above, whereas this rate can be higher at 2% - 12% per year for patients with diabetes. The rate of renal function deterioration depends on a variety of factors, including blood glucose and blood pressure control, lifestyle and genetic factors. When there is a consistent annual decline exceeding 4%, we identify these patients as having rapid renal function decline. Urine and blood tests are the routinely used in clinical practice for monitoring kidney function and the two markers are urine ‘albumin-creatinine ratio (ACR)’ and ‘estimated glomerular filtration rate (eGFR)’.” 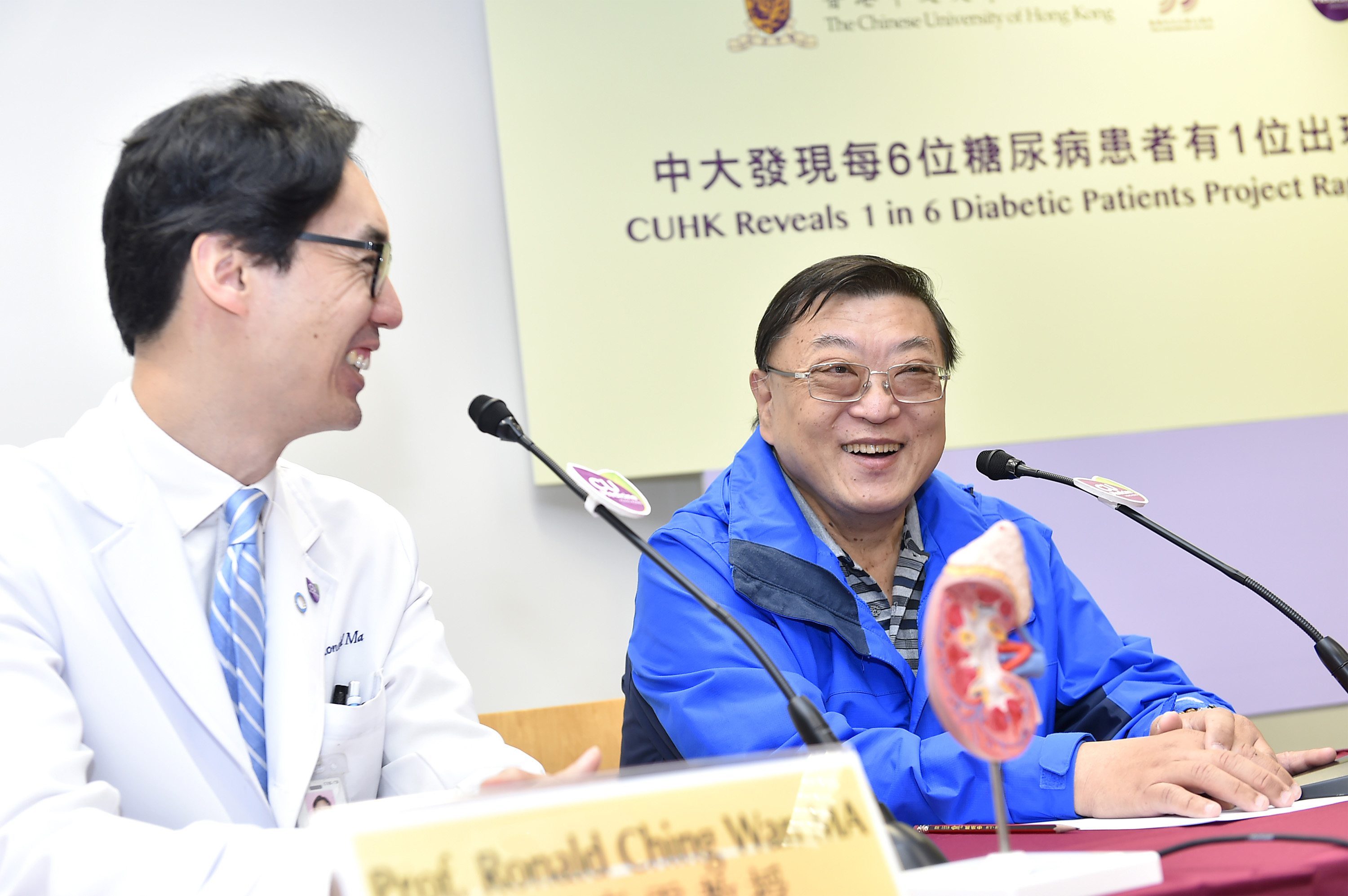 Mr. MAK has been suffering from diabetes and obesity for over 20 years. He later was diagnosed with diabetic kidney disease after noting the symptoms of proteinuria and frequent urination. He now maintains active control on weight, blood glucose and blood pressure which help slow down the kidney function decline. 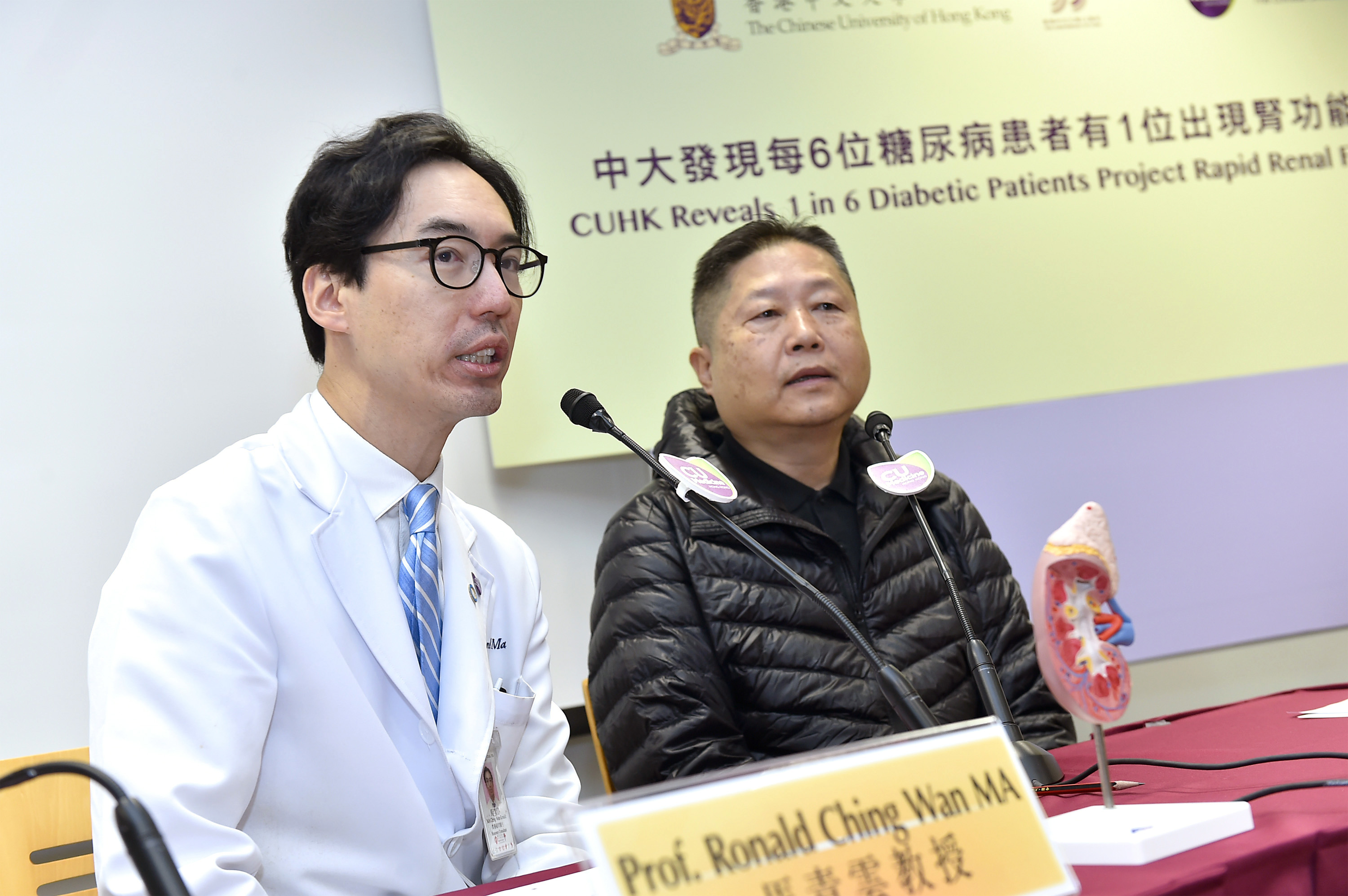 Mr. FU said he had no other symptoms of kidney disease except fatigue. He worried that he would have to undergo dialysis treatment when told to have diabetic kidney disease. He now measures blood pressure regularly and takes medicine on time to better manage his diabetic and kidney function conditions.

Between 1995 and 2007, the research team collected data from over 10,000 patients from the Hong Kong Diabetes Register at the Prince of Wales Hospital and followed 6,330 patients with type 2 diabetes without overt evidence of kidney disease for 13 years to monitor the changes in their kidney function. After analysing the data, researchers generated the eGFR trajectories and identified four patterns of renal function decline for patients with diabetes. Details are illustrated below:

Professor Ronald Ching Wan MA, Head, Division of Endocrinology and Diabetes, Department of Medicine and Therapeutics, Faculty of Medicine, CUHK remarked, “Our study revealed that 1 in 6 diabetic patients project rapid renal decline, which means their kidney function drops by an average of 4% or more each year. Category 4 is the most worrying group of patients, consisting mainly men, smokers and those with long duration of diabetes, with hypertension, high ACR and elevated HbA1c levels. We have also identified five genetic markers which may help identify these patients with rapid renal function decline. Early identification of these DKD patients can help to ensure they can have optimisation of their condition in order to slow down the rate of kidney damage.”

Professor Cheuk Chun SZETO added, “There are roughly 800,000 people suffering from chronic kidney disease in Hong Kong and an average of 1,200 new dialysis treatment cases each year. Renal function decline will increase the risk of cardiovascular disease and affect the normal functioning of other organs. It may progress to end-stage renal failure, which is fatal if not supported with dialysis treatment or kidney transplant. Diabetic patients have to pay extra attention to their kidney function and be aware should any of these symptoms emerge: significant decrease of urine output, frothy urine, oedema, fatigue or high blood pressure. eGFR may not be included in regular blood tests and since patients with diabetes carry a higher risk of renal disease, we strongly recommend for eGFR to be included in the routine management of patients with diabetes in order to better monitor their renal function.” 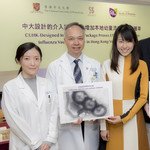 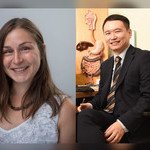