The Faculty of Medicine of The Chinese University of Hong Kong (CUHK) has conducted an intervention trial which proved that a four-component intervention package, designed by CUHK research team, could increase influenza vaccination uptake in children aged below 2 years. The result has been published in the international medical journal Vaccine. 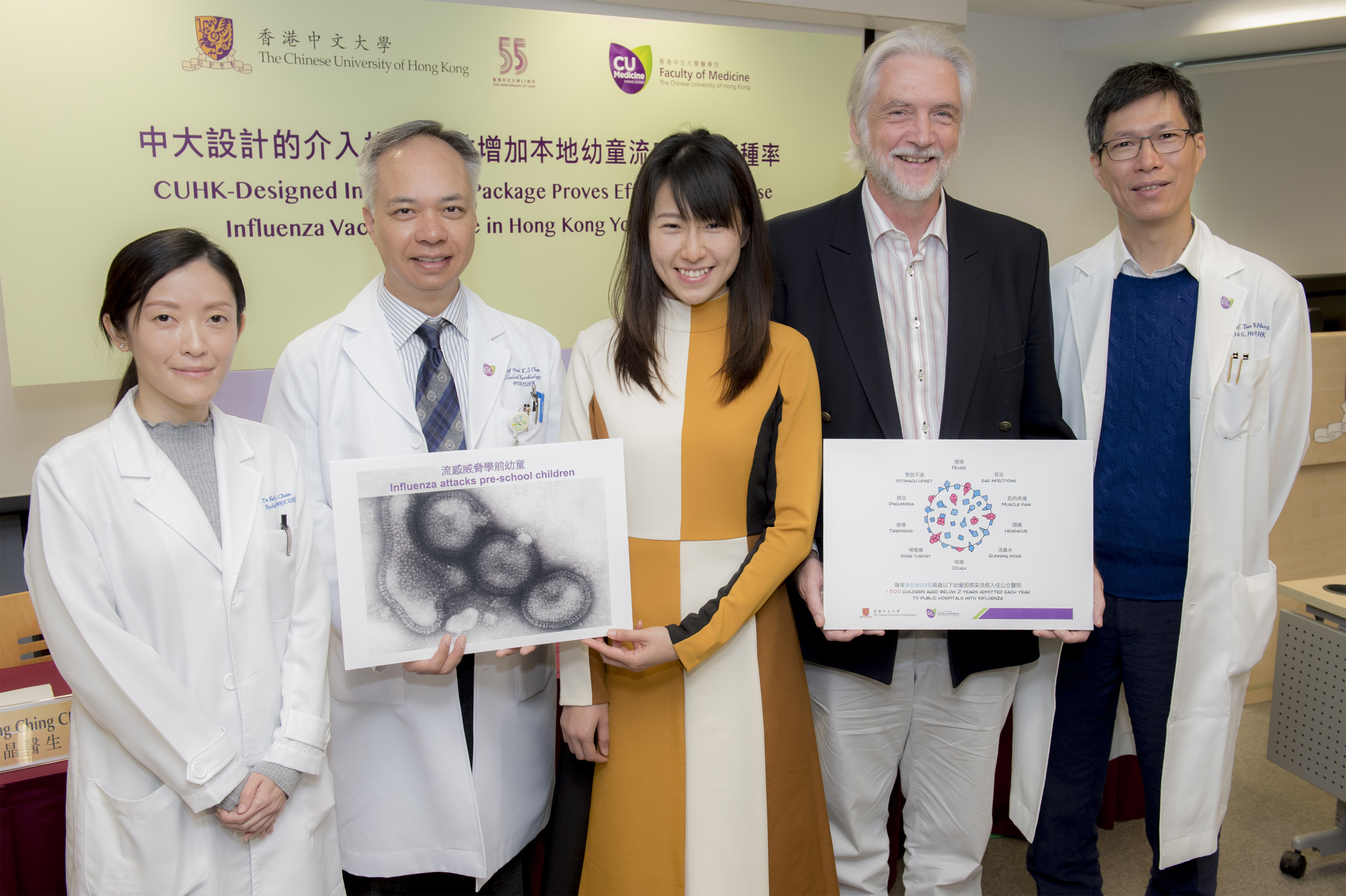 Influenza is a leading cause of hospitalisation among children in Hong Kong. More than 500 children aged 2 or below are admitted to public hospitals with influenza every year.

Professor Paul Kay Sheung CHAN, Chairman, Department of Microbiology, Faculty of Medicine, CUHK, explained, “Influenza can cause a mild respiratory illness but also cause serious complications such as pneumonia and even death. Hong Kong has two influenza peaks each year, a small summer peak and a larger winter peak.”

Professor Tony NELSON, Principal Investigator of the study and Clinical Professional Consultant, Department of Paediatrics, Faculty of Medicine, CUHK, remarked, “Our previous study proved influenza vaccine is at least 60% effective in preventing influenza and its associated hospitalisation and death cases of children aged below 6 years. The government has provided free or subsidised seasonal influenza vaccination to children between the age of 6 months and less than 12 years yet less than 20% of young children receive the vaccine over the years.” 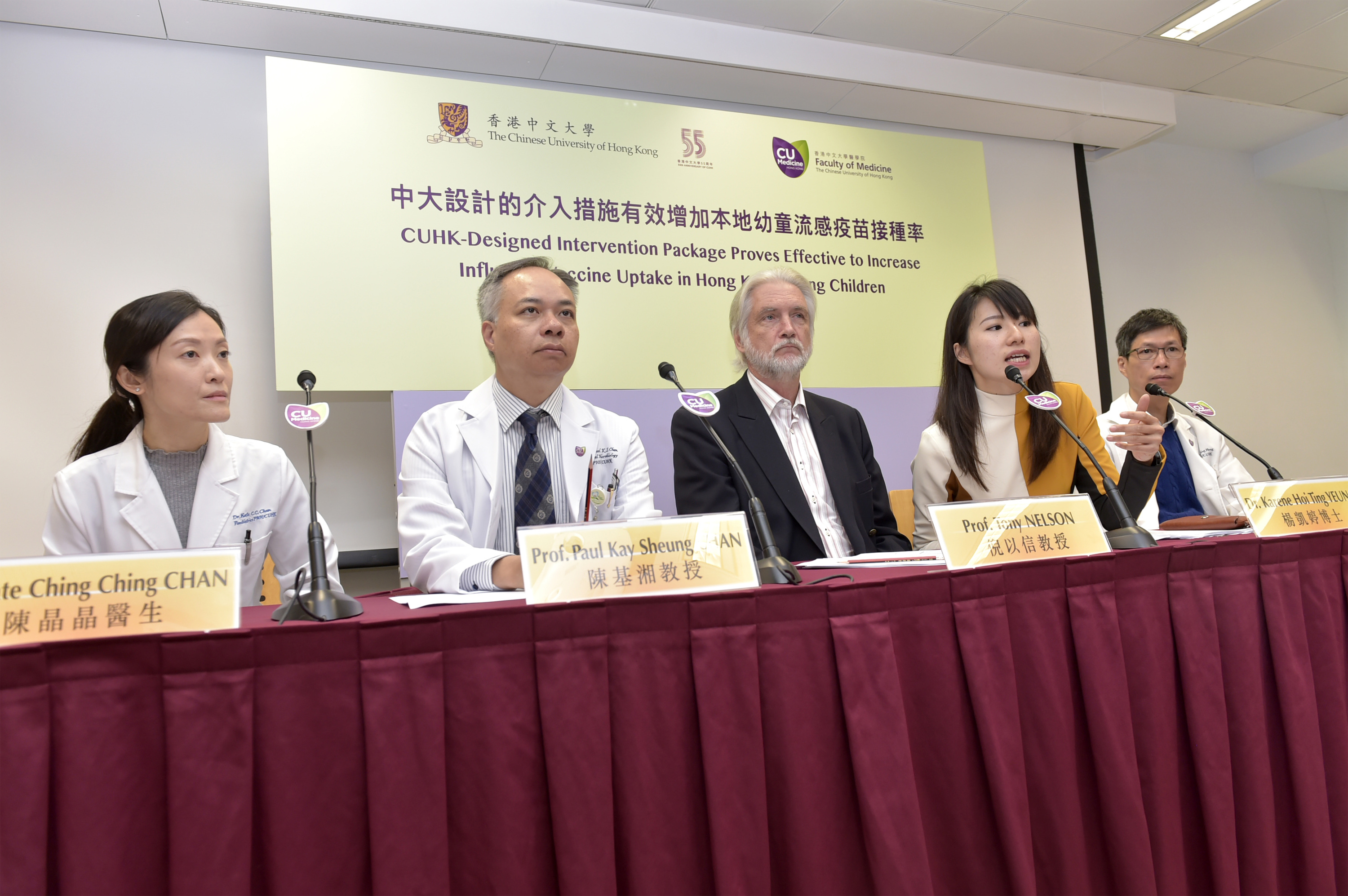 The team hopes that the influenza vaccine can be incorporated into Hong Kong’s routine Childhood Immunisation Programme so as to encourage more parents to have their children vaccinated.

In view of the low uptake rate, researchers from the Faculty of Medicine at CUHK conducted a study to investigate whether an intervention package would help boost the uptake and so provide extra protection to children. Between 2014 and 2015, 833 mother-infant pairs were enrolled from public hospitals and followed for two years. They were randomised into  control groups and intervention groups. The control groups received standard information about the seasonal influenza vaccination subsidy scheme, while the intervention groups additionally received: (1) a concise information sheet about the risks of influenza to children and the benefits of influenza vaccination, with explanation; (2) semi-completed forms to utilise the subsidy; (3) contacts of clinics that did not charge above the subsidy; and (4) text message reminders for vaccination. Key findings as follows:

Dr. Karene Hoi Ting YEUNG, coordinator and lead author of the study, and Postdoctoral Fellow, Department of Paediatrics, Faculty of Medicine, CUHK, stated, “The result showed that the number of children receiving influenza vaccine in the intervention groups were nearly 3 times as many as the control groups did. It proved the simple intervention package can increase influenza vaccine uptake at two years of age. Depending on the actual vaccine effectiveness and magnitude of the intervention’s impact, we estimated that 13% to 24% cases of influenza-associated admissions to hospital in children younger than 2 years old could be prevented.”

Dr. YEUNG added that the intervention could have an important positive impact on the health of children and the wider community but more work has to be done in terms of implementation. The team hopes that influenza vaccine can be incorporated into Hong Kong’s routine Childhood Immunisation Programme so as to encourage more parents to have their children vaccinated to prevent severe complications and hospitalisations. 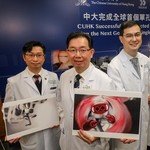 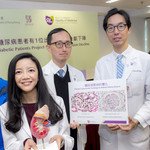