The Chinese University of Hong Kong’s (CUHK) Newborn Metabolic Screening Programme will launch an add-on test for Congenital Adrenal Hyperplasia (CAH) in 2016 thanks to a further donation from the Joshua Hellmann Foundation for Orphan Disease (JHF). This new CAH screening will enable early diagnosis and treatment of the recessive disorder that can be life-threatening and can lead to virilization of the external genitalia in female infants. From 15 February to 30 June 2016, newborns will be sponsored to take the new screening item.

【CAH and its treatment】

CAH is an autosomal recessive disorder with the majority (over 90%) of cases resulting from 21-hydroxylase deficiency. Affected infants may have deficient production of glucocorticoids and mineralocorticoids, and excessive production of androgens. Severely affected infants may suffer from salt-losing crises, hypoglycemia, shock and even death. Excessive androgens may lead to in utero virilization of the external genitalia in female fetuses.

‘According to data from Taiwan, there is one new case in every 10000-15000 newborns per year. And based on some US data, the mortality rate is around 4-10% in salt-wasting CAH without screening’, Dr. Ho Chung YAU, Clinical Assistant Professor (honorary), Department of Paediatrics at CUHK, remarked, ‘The mainstay of treatment is to replace glucocorticoids, mineralocorticoids and sodium supplement in the neonatal and infancy period. Treatment needs to be fine-tuned in order to reduce the morbidities and mortalities associated with adrenal insufficiency and androgen excess, aiming at normal growth and puberty in childhood and adolescence.’

If both parents carry the CAH recessive gene mutation, there is a 25% chance that the fetus will be affected by CAH and prenatal diagnosis can be offered to see if the fetus has inherited the mutations. However, most cases of CAH do not have known family history since this is a recessive disorder, prenatal diagnosis is not easy due to a lack of prenatal ultrasound features.

Dr. Yvonne Kwun Yue CHENG, Assistant Professor, Department of Obstetrics and Gynaecology, further explained, ‘Female fetuses may develop an abnormal or ambiguous genitalia because of the excess androgens related to CAH. If such abnormality is seen on ultrasound, CAH will be suspected and we can offer further genetic testing. On the other hand, most males do not show any prenatal sonographic abnormalities, and therefore, diagnosing CAH in male fetuses prenatally is much more difficult.’

CAH screening has been included as the newborn screening items in many developed countries such as United States, Australia, Canada, and Germany. ‘Time-resolved fluoroimmunoassay’ is adopted to measure the concentration of 17-hydroxyprogesterone (17OHP), a precursor of cortisol and the biomarker for CAH screening, in the infant’s blood.

Dr. Liz Yuet Ping YUEN, Clinical Associate Professor (honorary), Department of Chemical Pathology at CUHK said, ‘17OHP concentrations are high in normal newborns and drop rapidly within the first few days of life, while newborns with CAH have persistently high 17OHP level. Therefore, the best time for sample collection is within 48 hours or after. Besides this, transient elevation of 17OHP is commonly seen in babies born before 37 weeks of gestation. It is the reason why more false-positives are seen in premature babies than full term babies. In general, in 100 newborns with positive screening result, one to two will be confirmed to suffer from CAH.’

Starting from 2016, CAH screening will be launched by The Centre of Inborn Errors of Metabolism (CIEM) at CUHK as an add-on test to the current newborn metabolic screening programme. . Results will be available within 3 working days. If the screening result is positive, the parents will be contacted for further confirmatory testing and the newborns diagnosed as CAH will be referred to paediatrician specialists immediately for follow-up.

With a new donation from JHF to the amount of $500,000 this year, CIEM is able to set up this new and important CAH screening test and sponsor newborns to take the test. JHF has also pledged another $200,000 for supporting more newborns to do newborn metabolic screening.

Dr. Josephine Shuk Ching CHONG, Clinical Professional Consultant, Department of Obstetrics and Gynaecology and Department of Paediatrics, is especially thankful for the contribution of JHF to the screening programme, ‘The launch of the newborn metabolic screening programme in 2013 can raise public awareness of the importance of newborn screening and act as a useful reference for public health care providers. JHF’s support for the launch of the CAH screening can help reach an important milestone for the screening history of newborns in Hong Kong. It will enable early detection and offer timely treatment at the presymptomatic period, so as to avoid salt-losing adrenal crisis and reduce possible early infant death.’

With a donation of HK$1 million by JHF as the start-up funding, the departments of Chemical Pathology, Obstetrics and Gynaecology and Paediatrics at CUHK jointly developed the territory’s first newborn metabolic screening programme in July 2013. The programme can test 30 kinds of Inborn Errors of Metabolism (IEM) including amino acid disorders, fatty acid oxidation disorders and organic acid disorders. The test requires only a few drops of blood collected by pricking the baby's heel, and can be done 1 day after oral feeding has started, and within 7 days after birth.

More than 20,000 newborn babies have joined the newborn metabolic screening programme in the past 2.5 years. Five patients with IEM conditions have been identified and have been managed by the paediatrician at the metabolic clinic. CIEM has also provided newborn screening services to 11 hospitals and 4 clinics/laboratories. For enquiries on the programme, please call CIEM at (852) 3505 6412 (office hours) or (852) 3505 4219 (voice mail service available during non-office hours). 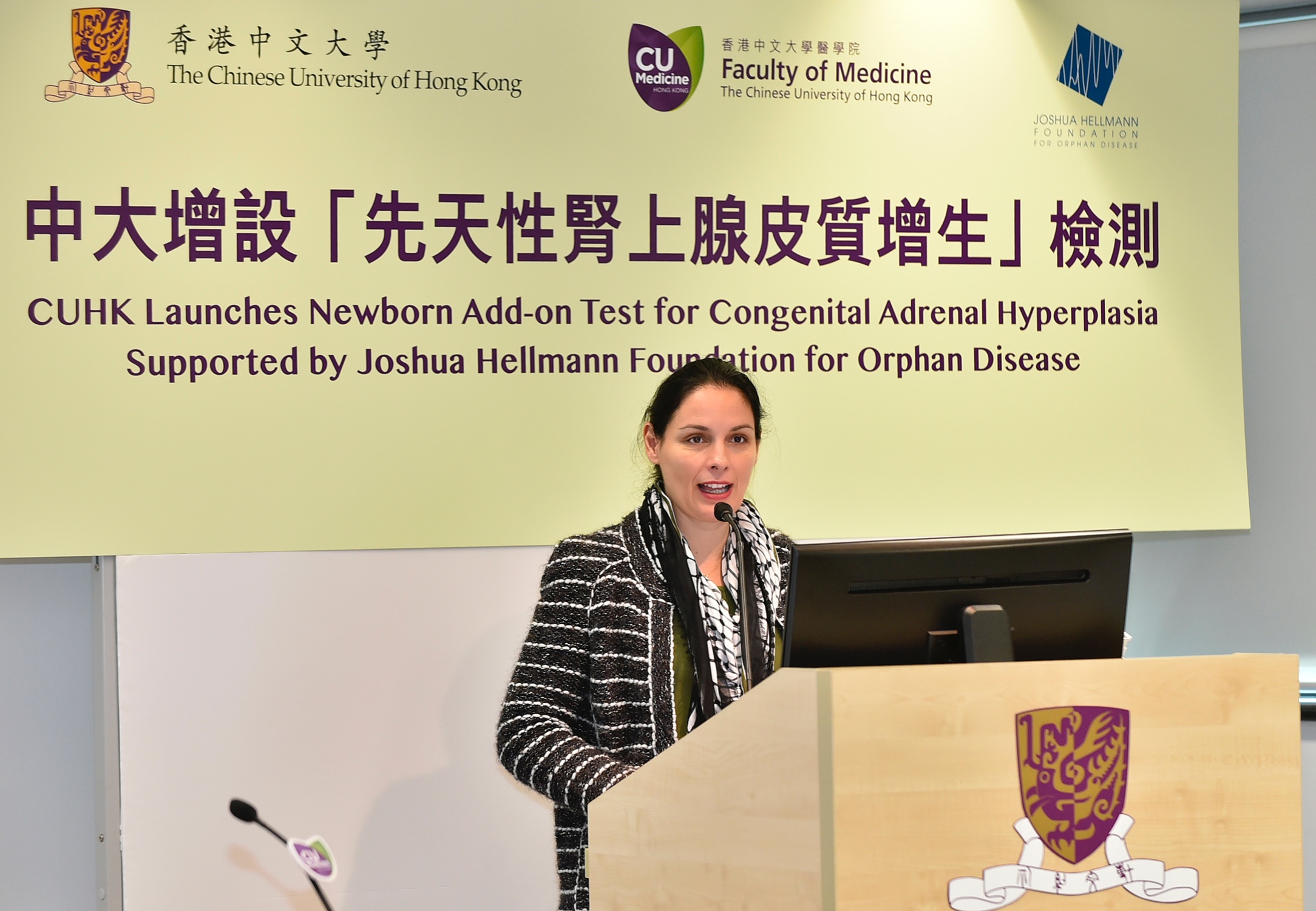 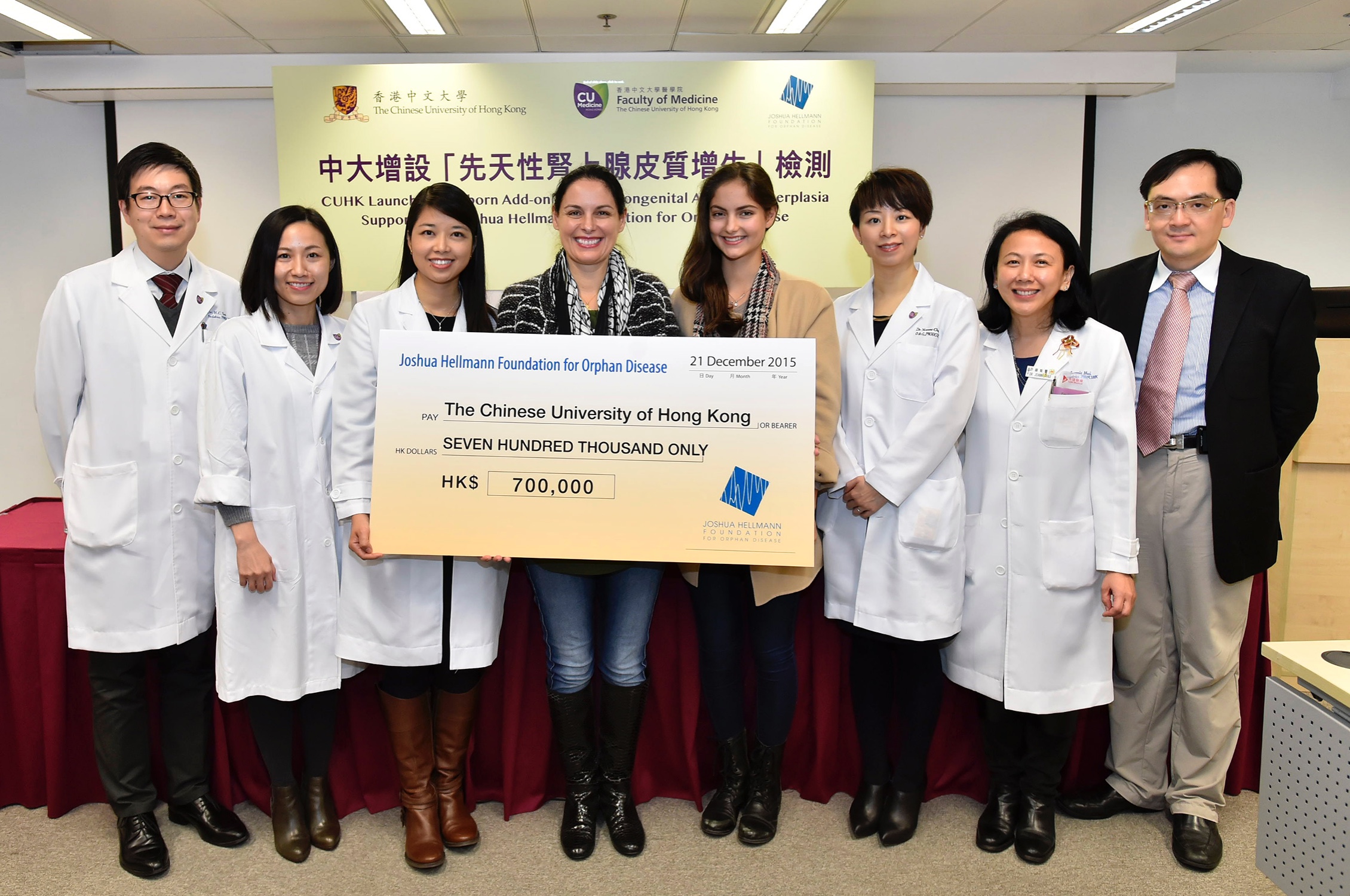 (4th and 5th from left) Mrs Christina STRONG, Founder and Chair of the Joshua Hellmann Foundation (JHF) for Orphan Disease, and her daughter present a cheque to CUHK Medicine. 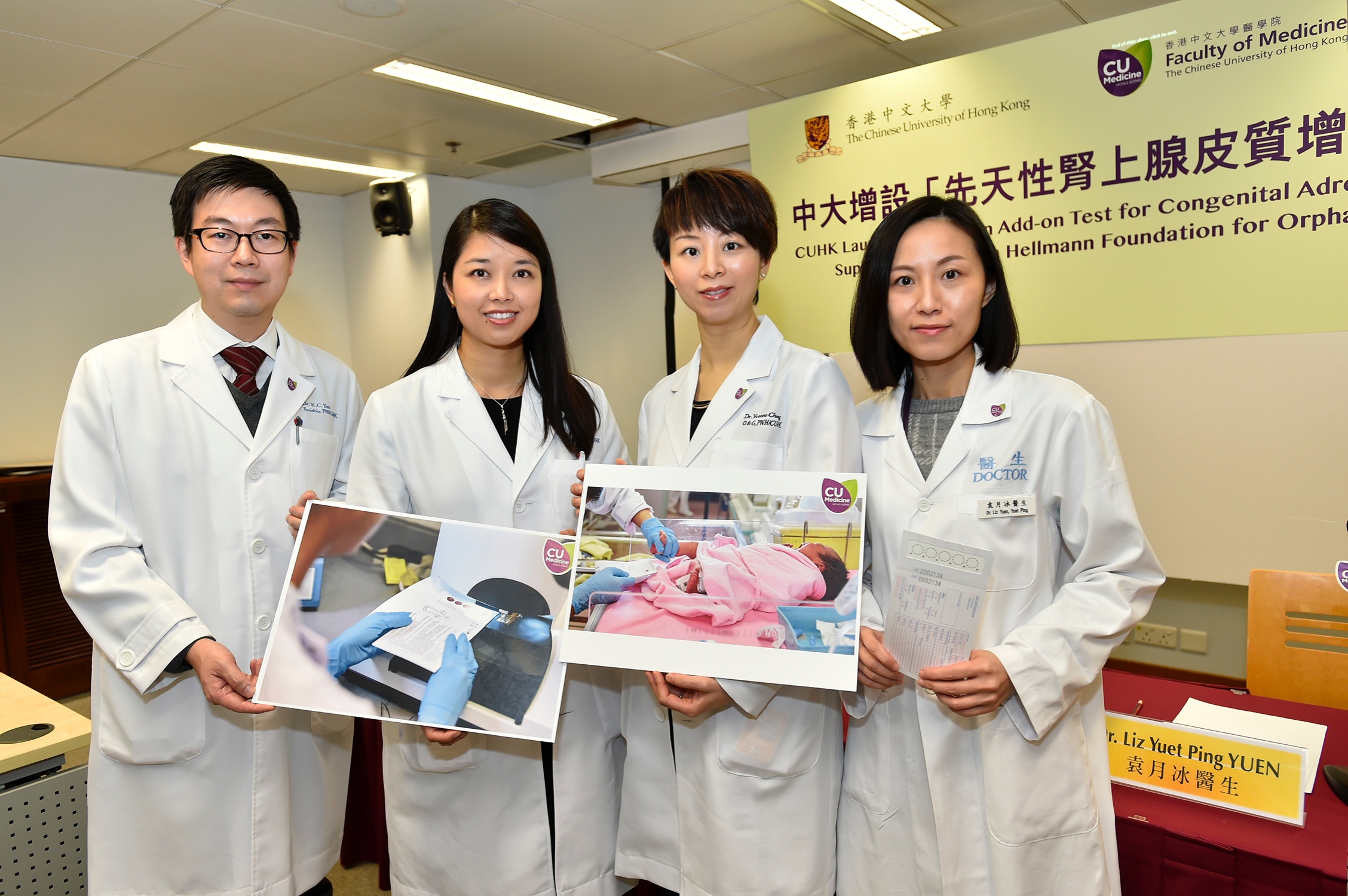 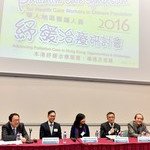 NEXT
CUHK Medical Students Tribute to the Youngest Silent Teacher 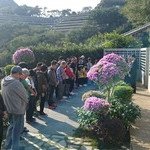