The Vascular and Interventional Radiology Foundation Clinical Science Centre (Centre) at The Chinese University of Hong Kong (CUHK) has successfully conducted an Asia’s first clinical research with seven medical centres in Hong Kong on the use of ‘Flow Diverters’ (Pipeline) in treating cerebral aneurysms. Under the leadership of Professor Simon Chun Ho Yu, Centre’s director and professor at Department of Imaging and Interventional Radiology at CUHK, the study discovered that ‘Flow Diverter’ (Pipeline) is a safe and effective approach to treat cerebral aneurysms. Cerebral aneurysm is a potential health hazard that occurs in about 2 to 6% of the population in Hong Kong. The etiology is thought to be associated with hypertension, atherosclerosis, and congenital factors leading to vessel wall weakening. 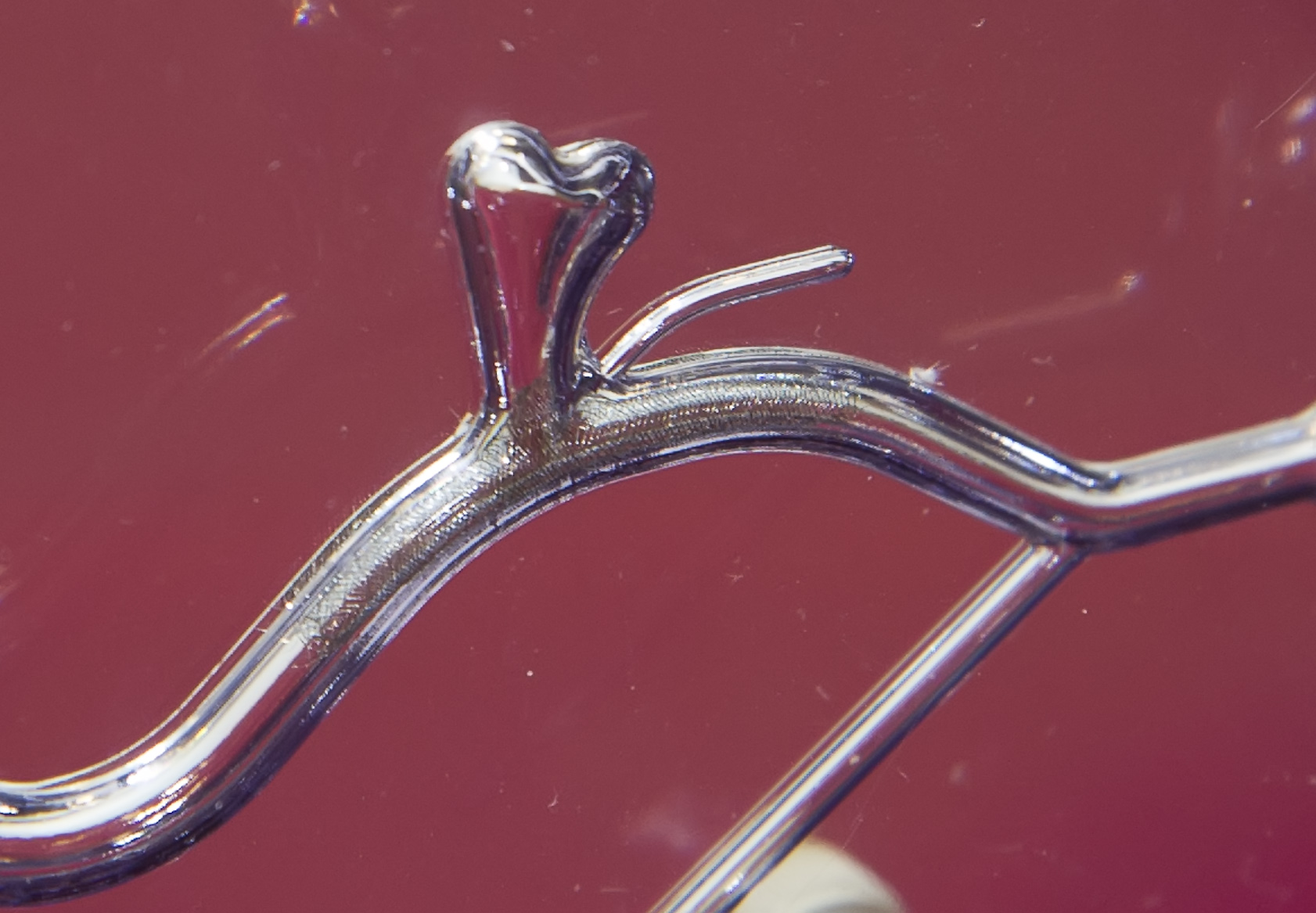 Aneurysm rupture is a cause of intracranial bleeding that may lead to severe disability and the death rate is as high as 45%. The risk of rupture of an aneurysm is about 1.3% per year. In the overall population, the incidence rate of aneurysm rupture is 10.5 per 100,000 people. Conventionally, cerebral aneurysms are treated with open surgery using clipping but it is perceived as invasive with risk. Endovascular coil embolization is a less invasive approach but its feasibility is limited by the fusiform morphology of the aneurysm. For large-sized aneurysms that have incorporated the parent vessel or aneurysms with wide neck, stent assisted coiling is necessary to retain the coils within the aneurysm sac so as not to interrupt the flow of the parent artery. Recurrence rates of aneurysms after treatment are as high as 17% for coil embolization and 15% for stent-assisted coiling.

The use of ‘flow diverters’ (Pipeline) is a technological breakthrough in the treatment of cerebral aneurysms. A flow diverter is a tube-like device composed of tightly knitted fine metal strips, to be implanted in the vascular segment affected by the aneurysm using percutaneous endovascular approach. After placement of flow diverters, blood flow is diverted away from the aneurysm so that the aneurysm eventually regresses. The treatment is not limited by the size or morphology of the aneurysm, and it does not affect blood vessels adjacent to the aneurysm. 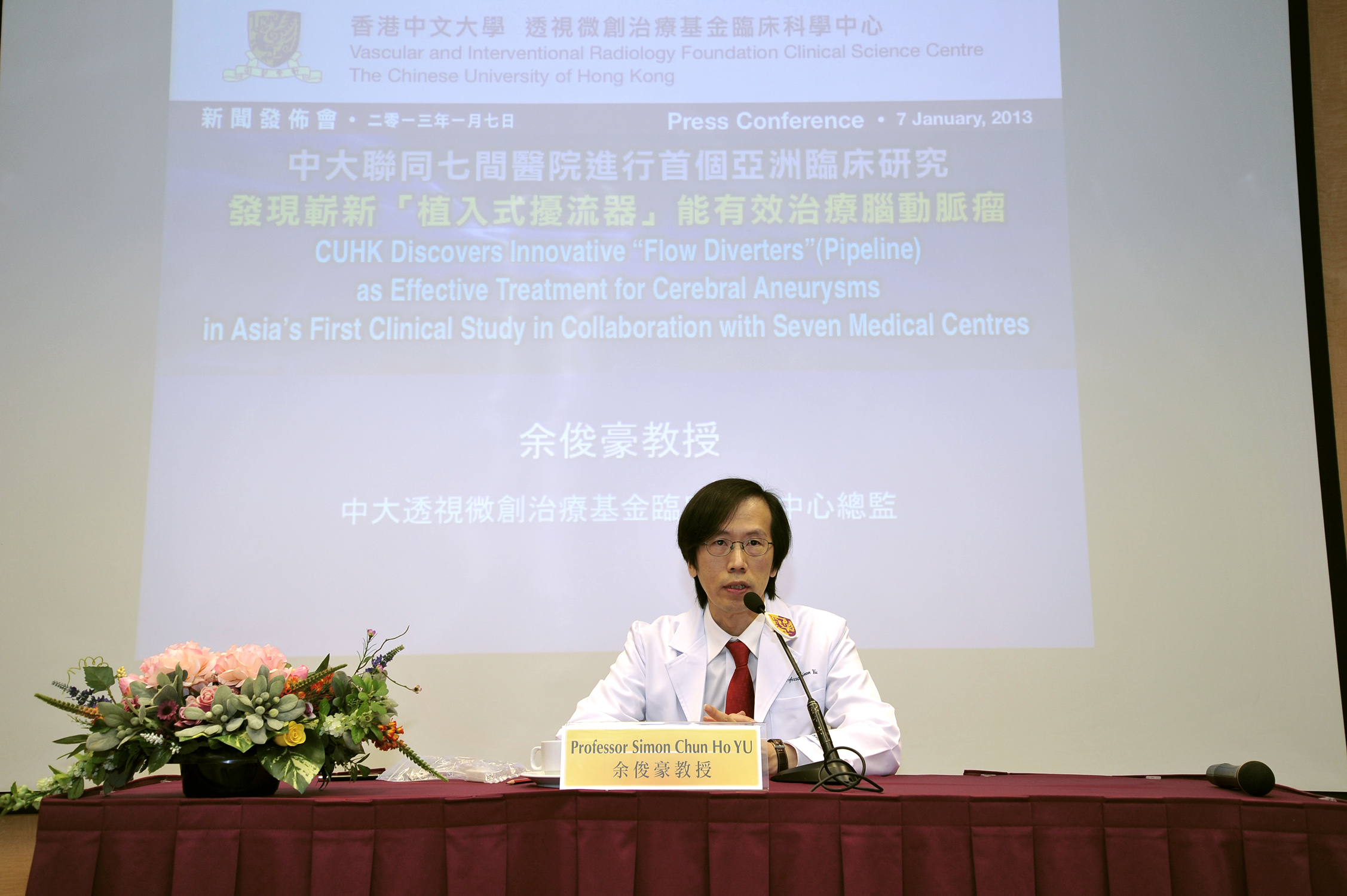 The clinical study was conducted from September 2008 to September 2011, involving 143 patients and 178 aneurysms. In this study, the flow diverter (Pipeline) was found to be a safe and effective treatment for aneurysms with unfavorable morphological features such as wide neck, large size, fusiform morphology, incorporation of side branches, and post-treatment recanalization. The study included 36 male and 107 female patients, of mean age 54.9 years. Cases studied included: (1) saccular or fusiform intracranial aneurysms, (2) untreated unruptured aneurysms or recurrent aneurysms following previous treatment, and (3) parent vessel of diameter 2.5-5.0mm distal or proximal to the target aneurysm. Thirty-four of all 178 aneurysms (19.1%) had been treated previously. The procedure was successfully accomplished in all aneurysms (100%). For most of the cases (81.5%), only one ‘flow diverter’ (Pipeline) was placed in each aneurysm. Patients were followed-up after the treatment for an average of 17.6 months (ranged from 3 to 39.2 months), complete occlusion was found in 55.7% of aneurysms at 6 months, 81.3% of aneurysms at 12 months, and 84.5% of aneurysms at 18 months. The peri-procedure death or major stroke rate was 3.5%. All parent arteries remained patent without occlusion in all 178 aneurysms during the follow-up period. Mild parent artery stenosis (to a degree of 20% to 30%) and occlusion of arterial side branches respectively occurred in 1.4% of the cases, without clinical consequence.

CUHK recommends ‘flow diverters’ (Pipeline) as a preferred treatment for unruptured aneurysms and recurrent aneurysms. The results of the study were published in the authoritative journal Radiology in December 2012. 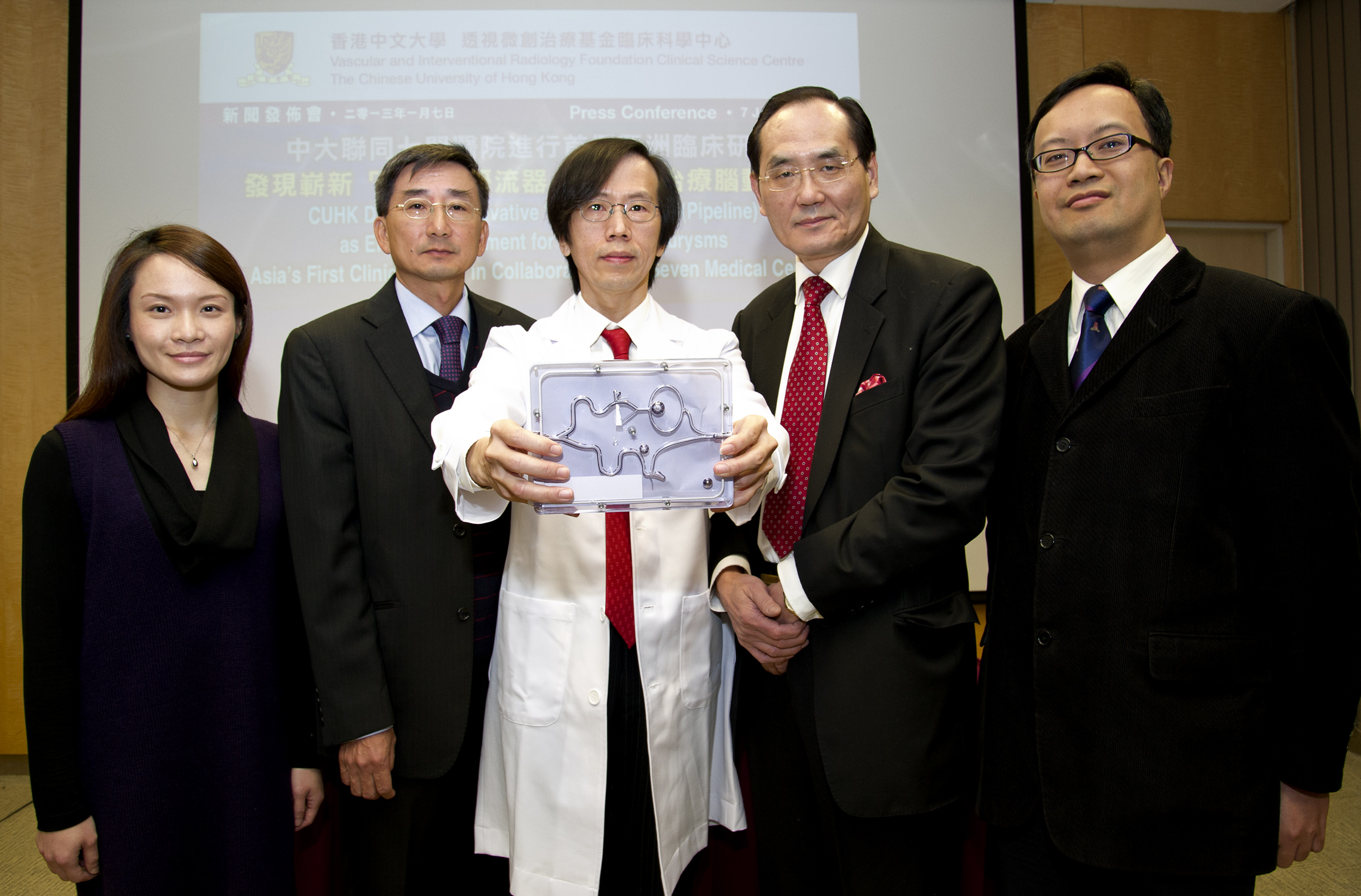 Medical centers and doctors participating in the study: 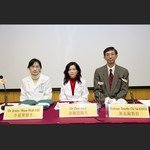 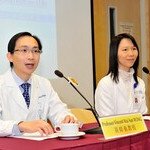